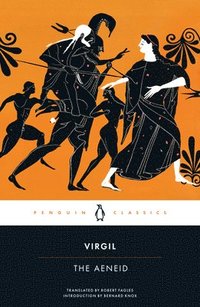 av Virgil
Häftad Engelska, 2011-01-19
139
Köp
Spara som favorit
Skickas inom 5-8 vardagar.
Fri frakt inom Sverige för privatpersoner.
Finns även som
Visa alla 8 format & utgåvor
Robert Fagles's award-winning translations of Homer's twin works The Iliad and The Odyssey have sold more than a million copies and become classics in their own right. With this stunning modern verse translation, Fagles introduces Virgil's Aeneid to a whole new generation of readers and completes the classic triptych at the heart of Western civilisation. The Aeneid tells the story of an epic voyage in which Aeneas crosses stormy seas, becomes entangled in a tragic love affair with Dido of Cathage, descends to the world of the dead - all the way tormented by the vengeful Juno, Queen of the Gods - and finally reaches Italy, where he will fulfil his destiny: to found the Roman people. A stirring tale of arms and heroism, dispossession and defeat, and an unsparing portrait of a man caught between love, duty, and fate, The Aeneid brings to life a whole world of human passion, nobility, and courage. Fagles's new translation retains all of the gravitas and humanity of the original as well as its powerful blend of poetry and myth. Featuring an illuminating introduction to Virgil's world from noted scholar Bernard Knox, this new Aeneid lends a vibrant, contemporary voice to the literary achievement of the ancient world.
Visa hela texten

Fagles illuminates the poem's Homeric echoes while remaining faithful to Virgil's distinctive voice * The New Yorker * After his best-selling Iliad and Odyssey, today's top-dog classical translator hits the triefecta with Virgil's epic about the founder of Rome * Newsweek *

Robert Fagles was Athur W. Marks '19 Professor of Comparative Literature, Emeritus, at Princeton University. He was the recipient of the 1997 PEN/Ralph Manheim Medal for Translation and a 1996 Academy Award in Literature from the American Academy of Arts and Letters, to which he was elected. Robert Fagles died in 2008.