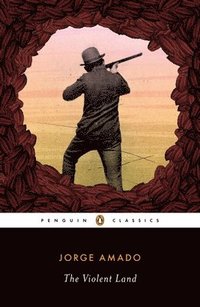 av Jorge Amado
Häftad Engelska, 2013-07-03
229
Köp
Spara som favorit
Skickas inom 3-6 vardagar.
Fri frakt inom Sverige för privatpersoner.
From the great Brazilian author, an exotic tale of greed, madness, and a dispute between two powerful families over land on the cocoa-rich coast of Bahia A Penguin Classic The siren song of the lush, cocoa-growing forests of Bahia lures them all--the adventurers, the assassins, the gamblers, the brave and beautiful women. It is not a gentle song, but a song of greed, madness, and blood. It is a song that promises riches untold, or death for the price of a swig of rum . . . a song most cannot resist--until it is too late--not Margot, the golden blond prostitute who comes for love; not Cabral, the unscrupulous lawyer who works for one of the Cacao "colonels"; and not Juca, whose ruthless quest to reap the jungle's harvest plants the seeds of his own destruction. For more than seventy years, Penguin has been the leading publisher of classic literature in the English-speaking world. With more than 1,700 titles, Penguin Classics represents a global bookshelf of the best works throughout history and across genres and disciplines. Readers trust the series to provide authoritative texts enhanced by introductions and notes by distinguished scholars and contemporary authors, as well as up-to-date translations by award-winning translators.
Visa hela texten

Jorge Amado (1912-2001) was born in the state of Bahia, Brazil, whose society he portrays in such acclaimed novels as Gabriela, Clove and Cinnamon and Dona Flor and Her Two Husbands. Samuel Putnam (1892-1950) was a translator and scholar of Romance languages, famous for his English translation of Don Quixote. Alfred Mac Adam is a professor of Latin American literature at Barnard College and Columbia University. He lives in New York.