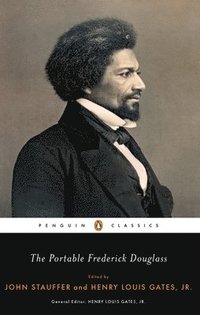 av Frederick Douglass, Henry Louis Gates, John Stauffer
(2 röster)
Häftad Engelska, 2016-07-01
159
Köp
Spara som favorit
Skickas inom 3-6 vardagar.
Fri frakt inom Sverige för privatpersoner.
Finns även som
Visa alla 1 format & utgåvor
A newly edited collection of the seminal writings and speeches of a legendary writer, orator, and civil rights leader. The life of Frederick Douglass is nothing less than the history of America in the 19th century from slavery to reconstruction. His influence was felt in the political sphere, major social movements, literary culture, and even international affairs. His resounding words tell not only his own remarkable story, but also that of a burgeoning nation forced to reckon with its tremulous moral ground. This compact volume offers a full course on a necessary historical figure, giving voice once again to a man whose guiding words are needed now as urgently as ever. The Portable Frederick Douglass includes the full range of Douglass's writings, from autobiographical writings that span from his life as a slave child to his memories of slavery as an elder statesman in the late 1870s; his protest fiction (one of the first works of African American fiction); his brilliant oratory, constituting the greatest speeches of the Civil War era, which launched his political career; and his journalistic essays that range from cultural and political critique toart, literature, law, history, philosophy, and reform.
Visa hela texten

"indispensable (...) a timelessly rewarding read in its totality" --Maria Popova

Frederick Douglass (Author) Frederick Augustus Washington Bailey was born into slavery in 1818 in Tuckahoe, Maryland. He changed his surname to Douglass to conceal his identity after escaping slavery in 1838 and making his way to Philadelphia and New York. Having been taught to read by the wife of one of his former owners, Douglass wrote later that literacy was his 'pathway from slavery to freedom', and in 1845 he published his instantly bestselling Narrative of the Life of Frederick Douglass, an American Slave. Renowned as the foremost African American advocate against slavery and segregation of his time, he repeatedly risked his own freedom as an antislavery lecturer, writer and publisher. He died in Washington, D.C., in 1895, and after lying in state in the nation's capital, was buried in the Mount Hope Cemetery in Rochester, New York.