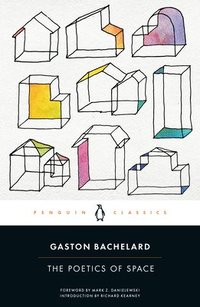 The Poetics of Space

av Gaston Bachelard
(1 röst)  |  Läs 1 recension
Häftad Engelska, 2014-12-30
108
Köp
Spara som favorit
Fåtal ex i lager. Skickas inom 1-2 vardagar.
Gratis frakt inom Sverige över 159 kr för privatpersoner.
Finns även som
Visa alla 1 format & utgåvor
Beloved and contemplated by philosophers, architects, writers, and literary theorists alike, Bachelard's lyrical, landmark work examines the places in which we place our conscious and unconscious thoughts and guides us through a stream of cerebral meditations on poetry, art, and the blooming of consciousness itself. Houses and rooms; cellars and attics; drawers, chests and wardrobes; nests and shells; nooks and corners: no space is too vast or too small to be filled by our thoughts and our reveries. With an introduction by acclaimed philosopher Richard Kearney and a foreword by author Mark Z. Danielewski.
Visa hela texten

Praise for Gaston Bachelard: "[Bachelard] is neither a self-confessed and tortured atheist like Satre, nor, like Chardin, a heretic combining a belief in God with a proficiency in modern science. But, within the French context, he is almost as important as they are because he has a pseudo-religious force, without taking a stand on religion. To define him as briefly as possible - he is a philosopher, with a professional training in the sciences, who devoted most of the second phase of his career to promoting that aspect of human nature which often seems most inimical to science: the poetic imagination ..." - J.G. Weightman, The New York Times Review of Books "[Bachelard] reminds me of skilled chess players who take the biggest pieces with pawns." -Michel Foucault (trans.) Praise for Mark Z. Danielewski's House of Leaves: "Any hope or fear that the experimental novel was an aberration of the twentieth century is dashed by the appearance of Mark Z. Danielewski's House of Leaves, the first major experimental novel of the new millennium. And it's a monster. Dazzling." -Washington Post Book World "An intricate, erudite, and deeply frightening book." - The Wall Street Journal

The son two of shoemakers, Gaston Bachelard had an illustrious academic career at the Sorbonne, eventually gaining the Legion d'Honneur and the Grand Prix National des Lettres. His work has influenced intellectual titans like Foucault, Merleau-Ponty, Deleuze and Althusser. Mark Z. Danielewski is best known for his striking debut novel, House of Leaves. Richard Kearney is the Charles B. Seelig Chair of Philosophy at Boston College.