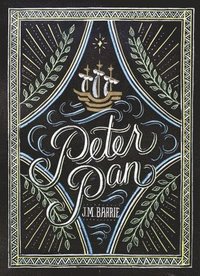 Köp
Spara som favorit
Kan levereras innan julafton!
Finns även som
Visa alla 9 format & utgåvor
One starry night, Peter Pan and Tinker Bell lead the three Darling children over the rooftops of London and away to Neverland - the island where lost boys play, mermaids splash and fairies make mischief. But a villainous-looking gang of pirates lurk in the docks, led by the terrifying Captain James Hook. Magic and excitement are in the air, but if Captain Hook has his way, before long, someone will be walking the plank and swimming with the crocodiles...
Visa hela texten

"Barrie wrote his fantasy of childhood, added another figure to our enduring literature, and thereby undoubtedly made one of the boldest bids for immortality of any writer. . . . It is a masterpiece." -J. B. PRIESTLEY

James Matthew Barrie was born in 1860 near Dundee in Scotland. He was the son of a weaver. He was educated at Glasgow Academy, Dumfries Academy and Edinburgh University. After working as a journalist in Nottingham he went to London and wrote for various newspapers and journals there. Between 1891 and 1902 Barrie published several successful novels and plays. Peter Pan, his greatest work, was first performed as a play in 1904. Although the original idea for Peter Pan appeared in an earlier adult novel, The Little White Bird, the full 'story' version for children was not set down on paper until 1911. J. M. Barrie died in 1937.