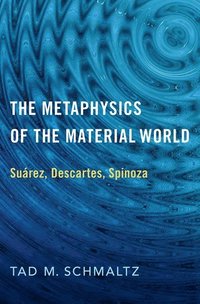 The Metaphysics of the Material World

This is an incredibly rich book, full of important ideas about how to understand Surez, Descartes, and Spinoza. It will be influential on scholars working on all three figures, and it makes an important contribution to the ongoing project of trying to understand seventeenth century philosophy better in the light of prior scholastic material."
-Robert Pasnau, Department of Philosophy, University of Colorado


This is a very strong, important addition to the literature. The literature on Descartes is huge and the literature on Spinoza is expanding at breakneck speed. But Tad Schmaltz offers something very distinctive: a consideration of their views on the metaphysics of body in relation to Francisco Surez. While recent scholarship has taken Surez into account in analysis of Descartes, the depth of Schmaltz' analysis is unusual and unearths novel, very
interesting material...Furthermore, Schmaltz takes the interesting approach of coming to this material from Pierre Bayle's objections to Spinoza. His book offers in-depth and thoughtful analysis of the material, and its interest goes well beyond its contribution to the literature on the three figures in question: its
treatment of the metaphysics of body contains ideas and insights that will be very useful in approaching other early modern thinkers. "
-Marleen Rozemond, Department of Philosophy, University of Toronto

Bloggat om The Metaphysics of the Material World

Tad M. Schmaltz is Professor of Philosophy and James B. and Grace J. Nelson Fellow at the University of Michigan, Ann Arbor. He specializes in early modern philosophy, and is the author of Malebranche's Theory of the Soul (OUP 1996), Radical Cartesianism (2002), Descartes on Causation (OUP 2008), and Early Modern Cartesianisms (OUP 2017). In addition, he has edited or co-edited Receptions of Descartes (2005), Integrating History and Philosophy of Science (2012), Efficient Causation: A History (OUP 2014), The Historical Dictionary of Descartes and Cartesian Philosophy (2015), The Problem of Universals in Early Modern Philosophy (OUP 2017), and The Oxford Handbook of Descartes and Cartesianism (OUP 2019).