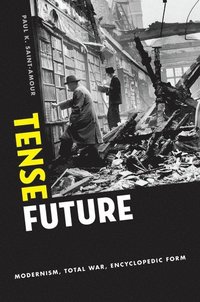 Elaine Scarry, author of Thermonuclear Monarchy: Choosing Between Democracy and Doom By moving our vision from earth to sky, from soldiers in the trenches to civilians under air raids, Paul Saint-Amour makes rich and surprising our understanding of the twentieth-century and its literature. Virginia Woolf, James Joyce, Ford Madox Ford, and we ourselves emerge in the arresting light of this first modern collective anxiety.


Jay Winter, author of Sites of Memory, Sites of Mourning: The Great War in European Cultural History This book is a tour de force, introducing an entirely new approach to the modernist imagination. Saint-Amour makes us hear the undertones of menace in interwar literature, thereby reconfiguring modernist fiction as meditations on disasters to come.


Mary L. Dudziak, author of War Time: An Idea, Its History, Its Consequences Paul Saint-Amour reinterprets culture during the years between World War I and World War II as an era of anxious anticipation. Thoughtful, penetrating, and important, Tense Future expands our understanding of war's destructive power.


Vincent Sherry, author of Modernism and the Reinvention of Decadence Tense Future moves fluently through the cultural records of the First World War, interwar, Second World War, and Cold War. Creating a wholly new archive, Saint-Amour does nothing less than shift the tense of imaginative action in the literature of major record: from memory, which Paul Fussell established as its primary imaginative circumstance, to anticipation; from reverie to dread. Our way of reading the literature of a century of war will be changed by
this comprehensive and compelling account.


W. T. Martin, CHOICE Intricately crafted and thoroughly documented, Tense Future not only redefines the modern epic but also lays the groundwork for reconceptualizing the interwar period and perspectives on temporality.

Paul K. Saint-Amour is Associate Professor of English at the University of Pennsylvania. President of the Modernist Studies Association, he currently coedits the Modernist Latitudes series published by Columbia UP. His previous books include The Copywrights: Copyright and the Literary Imagination (Cornell UP, 2003) and the edited volume Modernism and Copyright (OUP, 2010).