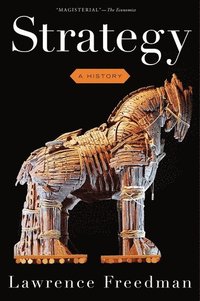 
Professional Investor I include this to show that it is possible to find a genuinely new insight on finance by reading beyond the obvious.


The Bookseller Stunning reviews in hardback


Ancient Rome Refocused, Rob Cain Professor Freedman teaches War Studies at King's College, and was the official historian of the Falklands War. His book is the type of work you dive into, reread, underline, and ponder. And I did just that, making copious notes while being watched by the guy sitting next to me. He leaned over and pointed at the book. "Excellent choice, sir. Couldnt pick a better book."


David Lorimer, Network Review The book is a masterly and definitive account of strategy.


Marcel Berni, Reviews in History Rich in detail and deeply contextualising, this book is not only the longest but also the most diverse work in recent years on the evolution of strategy ... This book belongs with the classics in the field of strategic studies ... it provides a huge fund of information about the concept of strategy. It is first and foremost its historical depth that requires Freedman's work to be included in every library of status.


Washington Post [Freedman's] books manage to delight the experts yet are still comprehensible to the general reader, a rare skill in this genre. On this occasion, he has produced what is arguably the best book ever written on strategy.


Financial Times This is a book of startling scope, erudition and, more than anything, wisdom.


of great value to planners, whether of an advertising campaign or a military one. Comprehensive, vigorous survey of strategy and its evolution...A lucid text that raises questions while answering others


New Criterion Sir Lawrence Freedman's 750-page magnum opus, Strategy: A History, is encyclopedic, although not alphabetical, a pleasure to dip into here and there...There are grand strategies set forth in several of the greater works covered by Freedman, but Strategy: A History holds the reader to the strategic level, a subset of grand strategy.


Mark Stout, War on the Rocks Strategy: A History is easily the most ambitious book that I have read in many years... With a book of this scope anybody can find something to disagree with but nobody can come away from this book without feeling enriched and intellectually challenged. It will live on as a classic.


The Daily Beast Strategy: A History, is an ambitious and sprawling book by a British military historian who has written widely, and very well, about nuclear and cold war strategy, the Falklands War, and contemporary military affairs, among other subjects... With admirable candor, Freedman tells us that he received the contract for this book in (gulp!) 1994, and that he made a 'num...

Lawrence Freedman has been Professor of War Studies at King's College London since 1982, and Vice-Principal since 2003. Elected a Fellow of the British Academy in 1995 and awarded the CBE in 1996, he was appointed Official Historian of the Falklands Campaign in 1997. He was awarded the KCMG in 2003. In June 2009 he was appointed to serve as a member of the official inquiry into Britain and the 2003 Iraq War. Professor Freedman has written extensively on nuclear strategy and the cold war, as well as commentating regularly on contemporary security issues. His most recent book, A Choice of Enemies: America Confronts the Middle East, won the 2009 Lionel Gelber Prize and Duke of Westminster Medal for Military Literature.

DEDICATION ; PREFACE ; Part I ORIGINS ; 1 ORIGINS 1: EVOLUTION ; 2 ORIGINS 2: THE BIBLE ; 3 ORIGINS 3: THE GREEKS ; 4 SUN TZU AND MACHIAVELLI ; 5 SATAN'S STRATEGY ; Part II STRATEGIES OF FORCE ; 6 THE NEW SCIENCE OF STRATEGY ; 7 CLAUSEWITZ ; 8 THE FALSE SCIENCE ; 9 ANNIHILATION OR EXHAUSTION ; 10 BRAIN AND BRAWN ; 11 THE INDIRECT APPROACH ; 12 NUCLEAR GAMES ; 13 THE RATIONALITY OF IRRATIONALITY ; 14 GUERRILLA WARFARE ; 15 OBSERVATION AND ORIENTATION ; 16 THE REVOLUTION IN MILITARY AFFAIRS ; 17 THE MYTH OF THE MASTER STRATEGIST ; PART III STRATEGY FROM BELOW ; 18 MARX AND A STRATEGY FOR THE WORKING CLASS ; 19 HERZEN AND BAKUNIN ; 20 REVISIONISTS AND VANGUARDS ; 21 BUREAUCRATS, DEMOCRATS, and ELITES ; 22 FORMULAS, MYTHS, AND PROPAGANDA ; 23 THE POWER OF NONVIOLENCE ; 24 EXISTENTIAL STRATEGY ; 25 BLACK POWER AND WHITE ANGER ; 26 FRAMES, PARADIGMS, DISCOURSES, AND NARRATIVES ; 27 RACE, RELIGION, AND ELECTIONS ; PART IV STRATEGY FROM ABOVE ; 28 THE RISE OF THE MANAGEMENT CLASS ; 29 THE BUSINESS OF BUSINESS ; 30 MANAGEMENT STRATEGY ; 31 BUSINESS AS WAR ; 32 THE RISE OF ECONOMICS ; 33 RED QUEENS AND BLUE OCEANS ; 34 THE SOCIOLOGICAL CHALLENGE ; 35 DELIBERATE OR EMERGENT ; PART V theories of strategy ; 36 THE LIMITS OF RATIONAL CHOICE ; 37 BEYOND RATIONAL CHOICE ; 38 STORIES AND SCRIPTS ; 37 BEYOND RATIONAL CHOICE ; 38 STORIES AND SCRIPTS ; ACKNOWLEDGMENTS