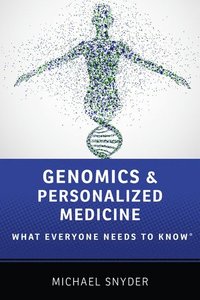 What Everyone Needs to Know

"Michael Snyder's Personalized Medicine: What Everyone Needs to Know is a very readable introduction to current developments in science, illustrated with multiple examples of individual cases." - European Journal of Health Law

Michael Snyder, PhD, is the Stanford Ascherman Professor, Chair of the Department of Genetics, and Director of the Center of Genomics and Personalized Medicine at Stanford University. His laboratory has produced many fundamental technologies for characterizing the human genome and other "-omes," including many pivotal discoveries about our DNA. In 2012 he used his own genome sequence to predict and help diagnose his own metabolic disorder, a story that received international news attention and shined a light on the promise of genomics. Snyder a co-founder of several successful biotechnology companies, including Personalis, Protometrix (now part of Life Technologies), Affomix (now part of Illumina), and Exelixis. He is regarded as a pioneer in bringing Big Data into medicine.

Acknowledgements Introduction 1: Personalized Medicine What is personalized medicine? What personal factors impact your health? 2: Genome Fundamentals What is DNA? What is a genome? What does the genome do? How does one person's genome differ from another person's genome? How do genomes of men and women differ? How is the genome decoded? 3: An Introduction to Cancer Genetics What is cancer and how does it arise? How do the BRCA1 and BRCA2 genes cause cancer? What are examples of other genes implicated in cancer? How does genetic information help us treat cancer? 4: Genomics and Cancer Treatment What has been learned from genome sequencing of cancer? How can genome sequencing advance cancer treatment? If I have cancer should I get my tumor genome sequenced? Why do anticancer drugs fail and how might genomic approaches help address this issue? Can genetics and genomics help detect early cancer and monitor treatment effectiveness? A new approach: What is immunotherapy? How can genomics be used to harness the patient's own immune system to fight their cancer? 5: Solving Mystery Diseases What is a mystery genetic disease? How many Mendelian diseases are there? How are genes responsible for genetic disorders identified? How useful are genomic approaches to solving mystery genetic diseases? Why can't most Mendelian diseases be solved? 6: Complex genetic diseases What is a complex genetic disease? How do complex genetics affect neurological diseases? How does complex genetics affect metabolic diseases? Can some diseases be both monogenic and complex? 7: Pharmacogenomics How can your genome directly help guide drug treatments for treating disease? What are other ways your DNA can guide drug treatments Are there sex differences in drug effects? 8: Genomics for the Healthy Person How can getting your genome sequence improve your health? Can genome sequencing affect the drugs someone take? Can genetic testing be used to predict sports performance and injuries? Will sequencing my genome affect my children and my relatives? 9: Prenatal Testing How are genome sequencing technologies changing prenatal testing? Can genome sequencing be used to identify other mutations, beyond chromosomal abnormalities, that might cause disease? Can genetic testing be useful for choosing healthier embryos and producing designer babies? 10: Effects of the environment on the genome and epigenetics How does the environment contribute to health? When did people first begin to study environmental effects? When do environmental effects begin? Can environmental factors directly impact the genome? What is epigenetics? What are some examples of environmental effects on physiology that are mediated through epigenetics? What is the role of epigenetics in disease? How will increased understanding of epigenetics impact health care? 11: Other 'Omes What other 'omes are useful for medicine? How can the transcriptome and proteome be useful? How can the metabolome be useful? How deeply can a person be analyzed? 12: The personal microbiome What is the microbiome? How is the microbiome studied? How does the microbiome affect health? How does diet affect the microbiome? Can the microbiome affect other aspects of our lives? Can the microbiome be altered to improve human health? 13: Your Immune System and Infectious Diseases How does your immune system protect you? How does the immune system vary among people and affect our health? How can we analyze infectious diseases? 14: How does age affect your health? Are there genetic factors underlying longevity? Are there environmental factors that affect aging and longevity? Does epigenetics control aging? Will we someday be able to control our aging? 15: Wearable Health Devices What other types of personal health information can be readily collected? How will this information be made available to, and used by, the individual? 16: Big Data and medicine How much data can be gathered about a single person? How much data