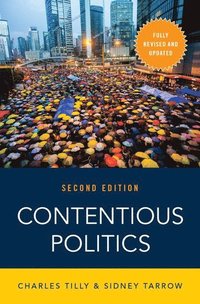 "The second edition of Contentious Politics offers state-of-the-art tools for examining contemporary and historical movements and wider forms of collective action from transnational terrorism to civil wars. The text will be indispensable in social movement-related courses as well as a resource for scholars of resistance movements and historical struggles." -Paul Almeida, University of California-Merced"What do anti-slavery protests in 18th century Great Britain share with the Maidan encampment and its outcome for contemporary conflicts in Ukraine and in Europe as a whole? This must-read volume addresses this question by leading us through the complexity of contentious politics. Much more than just an introduction to a vital field of study, it contributes to it at several levels. Not only does it cover a broad range of popular contention in Europe, Africa, the Middle East, and the Americas, but it also magisterially highlights the theoretical achievements and potential of the field of contentious politics." -Donatella della Porta, Scuola Normale Superiore and the European University Institute"I would be highly inclined to use the second edition of Contentious Politics as a main textbook for an undergraduate course on contentious politics and social movements. I believe that this updated edition will inspire discussions around the dialogue between theory and empirical cases. Moreover, its up-to-date analysis of major episodes of contention in the past decade will undoubtedly stimulate students to apply the theoretical definitions of contentious politics to real-world cases." -Diana Fu, University of Toronto

Sidney Tarrow is Maxwell M. Upson Emeritus Professor of Government and Visiting Professor of Law at Cornell University. His latest books are Strangers at the Gates: Movements and States in Contentious Politics (Cambridge 2012), The Language of Contention: Revolutions in Words, 1789-2012 (Cambridge 2013) and War, States, and Contention (Cornell 2015). He is a fellow of the American Academy of Arts and Science and a holder of the John McCarthy Prize for Social Movement Scholarship.