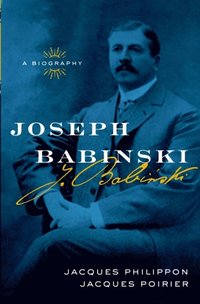 av Jacques Philippon, Jacques Poirier
E-bok (EPUB - DRM), Engelska, 2008-12-31
559
Ladda ned
Spara som favorit
Laddas ned direkt
Läs i vår app för iPhone, iPad och Android
Finns även som
Visa alla 1 format & utgåvor
Joseph Babinski's contributions to French medicine have been well-documented, but there has yet to be a significant and an authoritative biography of him--until now. Two French physicians, Jaques Philippon and Jacques Poirier, analyze Babinski's great scientific achievements, explore his unique family history, and publish, for the first time, a complete bibliography of his publications. The &quoteBabinski sign,&quote considered as his greatest diagnostic achievement, is typically one of the first neurological tests performed by a specialist or primary care physician to determine the existence of an injury to the pyramidal tract. Joseph Babinski, however, is more than just the &quoteBabinski sign&quote that has made him famous and revered. As the authors explain, he was an early contributor to the fields of cutaneous and tendinous reflexes, cerebellar and vestibular semiology, hysteria and pithitiasm, localization of spinal cord compressions, and the birth of French neurosurgery. This book chronicles his family's emigration from Poland to France, his tutelage and early career under great teachers such as Alfred Vulpian, Victor Cornil, and Jean-Martin Charcot at the Hopital de la Salpetriere in Paris, his methods and observations during 27 years as department head at La Pitie, as well as the close and unique relationship with his brother, Henri, the well-known Ali-Bab. Finally, Babinski's life and times can be accessed in one fresh and intriguing book!
Visa hela texten