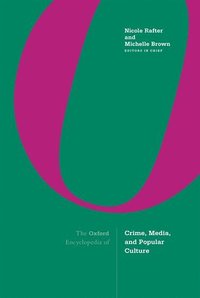 The Oxford Encyclopedia of Crime, Media, and Popular Culture

av Nicole Rafter
Inbunden Engelska, 2018-04-26
5439
Köp
Spara som favorit
Skickas inom 10-15 vardagar.
Fri frakt inom Sverige för privatpersoner.
The Oxford Research Encyclopedia of Crime, Media and Popular Culture is a collection of over 120 entries written by an assembly of nearly 200 leading international scholars. It asks how do people imagine crime and punishment? How do they go about thinking of deviance and reactions to it? To answer this, contributors look at media influences on the ways people think about crime and punishment influences that include photography, movies, newspapers,
detective novels, television, graphic arts, broadsides, myth, paintings, murals, the internet, and social media. It offers a foundational space for understanding the cultural life, imaginative force, and power of crime and punishment.
Visa hela texten

Nicole Rafter was Professor Emerita in the School of Criminology and Criminal Justice at Northeastern University, where she taught since 1977. She wrote five monographs: Partial Justice: Women, State Prisons, and Social Control; Creating Born Criminals; Shots in the Mirror: Crime Films and Society; The Criminal Brain; and (with M. Brown) Criminology Goes to the Movies. In addition, she published nine other books, including translations (with Mary Gibson) of the major criminological works of Cesare Lombroso, and published over fifty journal articles and chapters. In 2009 she received the American Society of Criminology's Sutherland Award; other honors include a Fulbright Fellowship and several fellowships to Oxford University. Michelle Brown is associate professor of Sociology at the University of Tennessee. Her research explores carceral studies, visual criminology, and law and society. She is the author of The Culture of Punishment (NYUP, 2009), co-author of Criminology Goes to the Movies (with Nicole Rafter; NYUP, 2011), and co-editor of Media Representations of September 11 (Praeger, 2003). She is currently co-editing the Sage journal Crime Media Culture, The Routledge International Handbook of Visual Criminology (2017); and the Palgrave MacMillan Crime, Media and Culture Book Series. Her next book examines alternative forms of justice in response to the rise of the carceral state.