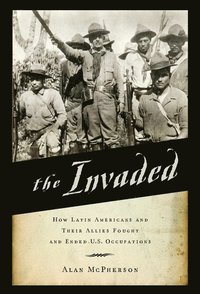 How Latin Americans and Their Allies Fought and Ended U.S. Occupations

T. Schoonover, Hispanic American Historical Review The research for The Invaded is impressive in scope and depth. ... [McPherson] mined [archives, oral history collections, and various primary and seconday] sources for information, participant anecdotes, and colorful perspectives. ... This book will enlighten scholars and students looking to understand US involvement in the Caribbean area.


Lester D. Langley, author of The Banana Wars: United States Intervention in the Caribbean, 1898-1934
Successive generations of scholars from different fields have written on the U.S. interventions and occupation in the Caribbean and Central America in the heyday of U.S. empire in the early twentieth century. Alan McPherson's contribution to this genre stands far above the rest. Using a broad array of sources, McPherson has given us a model study of three occupations from the era, in Haiti, the Dominican Republic, and Nicaragua, and brings to center stage the story
of the motives, makeup, and successes of who resisted these occupations.


Jeremi Suri, author of 'Libertys Surest Guardian: American Nation-Building from the Founders to Obama The Invaded offers a careful, sophisticated, and relevant analysis of American occupation efforts in the Western Hemisphere during the first half of the twentieth century. Alan McPherson shows that native resistance aimed at preserving independence undermined American ambitions, forcing the withdrawal of U.S. soldiers. This is a book that everyone interested in modern warfare, diplomacy, and counterinsurgency should read. Twenty-first century American
experiences in the Middle East echo this compelling history of Latin America a century earlier.


Max Paul Friedman, ReVista Alan McPherson's outstanding new book does much more than chart the sweeping impact of the major U.S. occupations in the Caribbean. It also does more than remind us vividly and in greater detail of some of what we already knew about the conduct of those occupations... McPherson's book is not merely a breathtaking compendium of evidence about the sordid nature of the occupations drawn from sources from five countries in three languages. It also benefits from his rare
ability to engage in historical comparison through multinational research and deep knowledge of more than one country.


The Register of the Kentucky Historical Society ...an important contribution to the limited historiography on U.S. occupations.


Timely and indispensable.... As most studies of occupations by definition focus on the occupier, McPherson refreshingly tells much of the story through the 'eyes of the invaded.'...The Invaded shows the reader how new technologies and media allowed guerrilla foes to fight back in the court of public opinion. McPherson believes these American occupations and the propaganda campaigns of the invaded sparked international solidarity movements that were as central to the
struggle as the armed insurgents themselves."-The ...