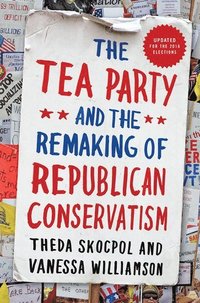 The Tea Party and the Remaking of Republican Conservatism


Kirkus Reviews The authors pepper firsthand anecdotes with extensive-and at times weighty-statistical and polling data...A timely study of a contemporary movement and its far-reaching effects on politics and policy.


Library Journal Readers interested in grassroots political organizations, the influence of outside interests on political parties, or the Tea Party itself, as well as those whose leanings fall elsewhere on the political spectrum will find this an eye-opening book."


Nicholas Lemann, Dean, and Henry R. Luce Professor of Journalism, Graduate School of Journalism, Columbia University This is an indispensable guide to the Tea Party phenomenon, and also an excellent demonstration of the power of first-hand research to add a richness of understanding that survey results can't provide. By spending patient time with Tea Party activists around the country, Skocpol and Williamson have been able to create a far fuller picture of the Tea Party than we have had before.


Morris P. Fiorina, Wendt Family Professor of Political Science, Stanford University
This important book will draw fire from both the political left and right, for contrary to the denunciations of liberal commentators, the Tea Party is not a motley collection of racist crazies. And contrary to the praise of conservative commentators, the Tea Party is not a pure grass-roots citizens' movement. Skocpol and Williamson provide a much-needed dose of analysis that begins to balance out the polemics that dominate discussion of the Tea Party.


Thomas Mann, Brookings Institution, co-author of The Broken Branch: How Congress is Failing America and How to Get It Back on Track Skocpol and Williamson have produced the richest, most nuanced portrait of the Tea Party since it burst onto the political scene in early 2009. Drawing on a wealth of observational, interview, survey, and web-based research, their analysis and presentation is both sympathetic with the participatory ethic of the Tea Partiers and critical of the way they have been used by conservative advocacy groups and press outlets to breed misinformation and shift the Republican
agenda sharply to the right. A must-read book for the 2012 election season.


Booklist
An interesting look at an influential political movement.


Publishers Weekly [A] fine-grained nuance and thoughtfulness that resonates.


Until three years ago, we knew the tea party as a long-ago event in Boston Harbor, aimed at a government across the Atlantic. In 2010, a new tea party stretched from the Atlantic to the Pacific and was aimed directly at Washington. That event changed the Republican Party, the United States Congress, and the Obama presidency. This book delves deeply into what happened in 2010, why it happened, and what the Tea Party means for the future of American politics. It's
a book every student of American politi...

Bloggat om The Tea Party and the Remaking of Republi...

Theda Skocpol is the Victor S. Thomas Professor of Government and Sociology at Harvard University, a member of the National Academy of Sciences, and past president of the American Political Science Association. Vanessa Williamson is a PhD candidate in Government and Social Policy at Harvard University. Previously, she served as the Policy Director for Iraq and Afghanistan Veterans of America.

Preface and Acknowledgments Introduction: "I Want My Country Back!" 1. Behind the Costumes and Signs: Who are the Tea Partiers? 2. What They Believe: The Ideas and Passions of Tea Partiers 3. Mobilized Grassroots and Roving Billionaires: The Panoply of Tea Party Organizations 4. Getting the Word Out: The Media as Cheerleader and Megaphone 5. How the Tea Party Boosts the GOP and Prods It Rightward 6. The Tea Party and American Democracy