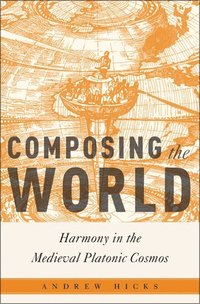 Harmony in the Medieval Platonic Cosmos

av Andrew Hicks
Inbunden Engelska, 2017-02-09
449
Köp
Spara som favorit
Skickas inom 7-10 vardagar.
Fri frakt inom Sverige för privatpersoner.
Finns även som
Visa alla 2 format & utgåvor
Taking in hand the current "discovery" that we can listen to the cosmos, Andrew Hicks argues that sound-and the harmonious coordination of sounds, sources, and listeners-has always been an integral part of the history of studying the cosmos. In Composing the World, Hicks presents a narrative tour through medieval Platonic cosmology with reflections on important philosophical movements along the way. The book will resonate with a variety of readers, and it
encourages us to rethink the role of music and sound within our greater understanding of the universe.
Visa hela texten

Jacomien Prins, Isis written from a multidisciplinary perspective that includes musicology, philosophy, and history of science ... the inspiration Hicks's book provides to reflect on the place of music in historical and contemporary ways of world-making.


Speculum Composing the World is itself well-composed its chapters flow, despite their many long citations from the works under discussion. As the book is very much about these texts, most readers will be glad of this florilegium ... Hicks has done a wonderful job of making a complex subject and its somewhat forbidding texts accessible and of drawing out their importance and relevance to manifold wider concerns.


Plainsong & Medieval Music Andrew Hicks has been so bold as to add a new book about world harmony, the music of the spheres, and the medieval reception of the Pythagorean concept of a creation organised according to musical principles to the already existing wealth of scholarship ... Hicks has chosen an approach which is new and refreshing, and which goes far beyond the boundaries of what already exists on the subject.


Mittellateinisches Jahrbuch Andrew H's Composing the World is a well-written and informative work. It was undoubtedly a courageous and imaginative decision to embark on a study of the notion of cosmic harmony in twelfth-century Latin sources, since a successful outcome could only be achieved by someone who combines many skills including not only musicology but medieval Latin philology and paleography, not without some acquaintance with the histories of philosophy and science ... Andrew
H. is obviously a person of great intelligence and already of considerable learning. It seems to me that with his range of expertise he is adding greatly, and could presumably so add in the future, to medieval musicology and medieval studies more generally.


British Journal for the History of Science This ambitious book opens a new window onto twelfth-century philosophical thought, and successfully shows how deeply Platonic conceptions of harmony were embedded within it. As well as becoming essential reading for medievalists who want to develop their knowledge of speculative music theory, it is also worth the attention of early modernists and scholars who focus on present-day philosophical and scientific thought.


Music and Letters Hicks writes towards the beginning of his book that, if we neglect the natural philosophers of the twelfth century, 'we have done ourselves and the discipline of musicology a grand disservice' (p. 8). By bringing a musicological perspective to his engagement with these natural philosophers, he enriches our understanding of the twelfth century's musical speculation and raises new questions that broaden musicology itself.


Bryn Mawr Classical Review There is no other work on this topic that can compare in terms of depth, scope, and complexity. This book is likely to become an indispensable point of reference for the study...

Andrew Hicks is an Assistant Professor of Music and Medieval Studies at Cornell University, a member of the graduate fields of Classics and Near Eastern Studies, and a faculty affiliate in Religious Studies. His scholarship clusters around the intellectual history of musical thought from a cross-disciplinary perspective that embraces philosophical, cosmological, scientific, and grammatical discourse in Late Antiquity and the Middle Ages, and spans the linguistic and cultural spheres of Latin, Greek, Persian, and Arabic.