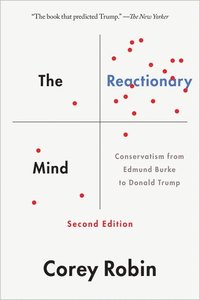 Acclaim for The Reactionary Mind:

The New Republic
<"Robin is an engaging writer, and just the kind of broad-ranging public intellectual all too often missing in academic political science. Robin's arguments deserve widespread attention."

The Observer
A very readable romp through the evils of Conservatism."

Dissent
The common opinion on the Left is that conservatives are fire-breathing idiots, who make up in heat what they lack in light. Robin's book is a welcome correction of this simplistic view and puts the debate where it ought to be: on the force and content of conservative ideas."

Times Higher Education
This little book will continue to spark controversy, but that is not the reason to read it: it is a witty, erudite and opinionated account of one of the most significant movements of our times."

The Daily
...written with panache. The series of scholarly strikes Robin makes against conventional wisdom are often exhilarating."

Barry Goldwater, Antonin Scalia, Irving Kristol; others will enjoy his demolition of Ayn Rand's intellectual pretensions. Some will be uncomfortable when they discover that those who too lightly endorse state violence, and even officially sanctioned torture, include some of their friends. That is one of the things that makes this such a good book."
The Reactionary Mind is a wonderfully good read. It combines up-to-the-minute relevance with an eye to the intellectual history of conservatism in all its protean forms, going back as far as Hobbes, and taking in not only restrained and sentimental defenders of tradition such as Burke, but his more violent, proto-fascist contemporary Joseph de Maistre. Some readers will enjoy Corey Robin's dismantling of different recent thinkers


from Hobbes to Ayn Rand, from Burke to Sarah Palin A fascinating exploration of a central idea: that conservatism is, at its heart, a reaction against democratic challenges, in public and private life, to hierarchies of power and status. Corey Robin leads us through a series of case studies over the last few centuries

Corey Robin teaches political science at Brooklyn College and the CUNY Graduate Center. His writings have appeared in the New York Times, Harper's, and the London Review of Books.