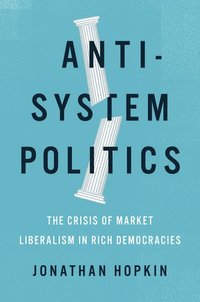 The Crisis of Market Liberalism in Rich Democracies

Jonathan Hopkin, Democracy Paradox Jonathan Hopkin offers a well-researched book which identifies connections between the anti-system politics in the United States, Britain, Greece, Spain and Italy. He finds there is a clear divide in how Northern and Southern Europe express their forms of anti-system politics. But he demonstrates how they both have common threads which tie them into a common zeitgeist which has affected the Western political tradition. This is quite an accomplishment.

Jonathan Hopkin is Associate Professor of Comparative Politics in the Department of Government at the London School of Economics. He is the author of Party Formation and Democratic Transition in Spain (1999) and co-editor of Coalition Britain (2012). He has published widely on the party politics and political economy of Europe. He contributes to several blogs and writes regularly for Foreign Affairs.