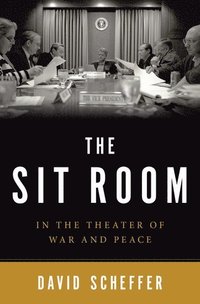 In the Theater of War and Peace

Thomas Pickering, former U.S. Under Secretary of State and Ambassador to Russia, India, the United Nations, Israel, El Salvador, Nigeria, and Jordan David Scheffer provides an objective, first-hand study of the extended policy debates in the White House Situation Room over resolving Bosnia. Intricate, intriguing details balanced with moments of deep drama punctuate a text whose value to the expert and history buff alike makes it a prime read. His trenchant conclusions on improving the Sit Room process are an added plus.


Tom Gjelten, NPR Correspondent For Secretary of State Warren Christopher, what to do about the shame of Bosnia was 'the problem from hell,' but it had to be answered. Thanks to David Scheffer's riveting behind-the-scenes account of the tortuous debates in the White House basement, we now know exactly what it took. This book will be a classic of diplomatic history.


Julian Borger, World Affairs Editor, The Guardian This is a fascinating insider's account of one of the most momentous U.S. foreign policy decisions of recent decades - whether to intervene in the Bosnian conflict. With its level of detail, the vivid account of being inside the Sit Room at the moment when life-and-death choices can no longer be ducked, David Scheffer's impressive book helps provide a roadmap for tackling the dilemmas of humanitarian intervention.


Roy Gutman, Freelance Correspondent, winner of the Pulitzer Prize for A Witness to Genocide This fly-on-the-wall account of the crafting of Balkans policy in Bill Clinton's first term opens slowly with top aides floundering over a genocidal war that's out of control, but it picks up steam as they spot the chance for a U.S. leadership role and climaxes with a gripping account of the run-up to the Dayton peace conference. One figure missing in their deliberations is the chief policy wonk himself, who rarely drops into the Situation Room. Great insights into
how the foreign policy sausage is made.


William J. Burns, President, Carnegie Endowment for International Peace and former Deputy Secretary of State For those who have never had the honor - and the challenge - of sitting in the Situation Room, David Scheffer offers the closest thing: a vivid account of the human dimension of policymaking, the pressures of imperfect choices with imperfect information under extraordinary time pressures, and a timely reminder of the power and purpose of American diplomacy.


Publishers Weekly Scheffer ... offers an insider's detailed account of the "three-year conversation" that took place in the White House situation room as policy makers tried to grapple with the early-1990s Balkans War. For Scheffer, deliberations in the "sit room" were characterized both by courageous, innovative thinking - in particular that of Scheffer's boss at the time, Madeleine Albright, U.S. permanent representative to the United Nations - and by "procrastination, fear of the
unknown, and a futile search for alterna...

David Scheffer worked in the Deputies Committee of the National Security Council during the early 1990's when the Balkans War raged. He then became America's first Ambassador at Large for War Crimes Issues (1997-2001). A graduate of Harvard, Oxford, and Georgetown universities, he is the Mayer Brown/Robert A. Helman Professor of Law at Northwestern University Pritzker School of Law and is widely published in international law and politics. Ambassador Scheffer was one of Foreign Policy Magazine's "Top Global Thinkers of 2011," won the Berlin Prize in 2013, and received the Champion of Justice Award from the Center for Justice and Accountability in 2018.