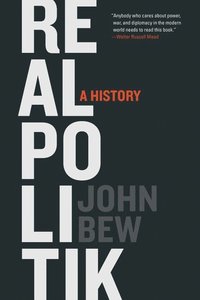 The American Conservative An interesting and wide-ranging examination of [the term 'realpolitik']."

Sir Lawrence Freedman, Emeritus Professor of War Studies, King's College London, author of Strategy: A History
By taking us back to the origins of Realpolitik John Bew shows how a long-established strategic concept doesn't mean what we thought it meant, and in the process throws new light on the history of thinking about international affairs."

The National Interest One of Bew's most valuable services to scholarship in the book is in tracing the intellectual development of the European migrs like Hans Morgenthau and Arnold Wolfers who helped stimulate the postwar American school of realism in international-relations theory."

Washington Free Beacon Bew's book is a fascinating biography of an idea."

War on the Rocks [A] fascinating quest to refine our understanding of yet another semantic import from Germany - the concept of realpolitik . . . In its careful, evenhanded, analysis of one of the Western world's most consequential intellectual traditions, Professor Bew's book harks back to the finest tradition of British scholarship, bringing to mind the work of people such as Lawrence Freedman, Hew Strachan, or Michael Howard. In fact, this reviewer can think of no better
companion volume to this future classic than Howard's seminal work on Europe's other great foreign policy tradition - liberalism."

The Weekly Standard So thorough is Bew in recounting the history of the use of the word (realpolitik) that it is difficult to imagine that there is much left to discover."

Walter Russell Mead, James Clarke Chace Professor of Foreign Affairs and Humanities at Bard College and Professor of American Foreign Policy at Yale University Realpolitik is one of those words that everybody uses but nobody understands. In this thoughtful, lucid and deeply researched book, John Bew shows how debates over its meaning helped shape some of the biggest foreign policy debates of the last 150 years. Anybody who cares about power, war and diplomacy in the modern world needs to read this book."

International Affairs There are so many high points in the book that one is spoiled for choice...Bew's is an account that will be returned to again and again for illumination on the most protean, occasionally incoherent but nonetheless successful riposte, if not to liberalism at home, certainly to liberalism abroad."

New Books Network Lively, encyclopedic, and utterly original, Realpolitik illuminates the life and times of a term that has shaped and will continue to shape international relations."

John Bew teaches history and foreign policy at the War Studies Department at King's College London. Previously he was a Lecturer in Modern British History at Cambridge. In 2013 he was named to the Kissinger Chair at the John W. Kluge Center at the Library of Congress. He is the author for four books, most recently Castlereagh: A Life.