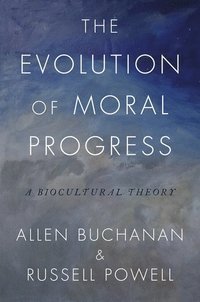 The Evolution of Moral Progress

av Allen Buchanan
Inbunden Engelska, 2018-08-30
396
Köp
Spara som favorit
Finns även som
Visa alla 2 format & utgåvor
Steven Pinker has said that one of the most important questions humans can ask of themselves is whether moral progress has occurred or is likely to occur. Buchanan and Powell here address that question, in order to provide the first naturalistic, empirically-informed and analytically sophisticated theory of moral progressexplaining the capacities in the human brain that allow for it, the role of the environment, and how contingent and fragile moral progress can
be.
Visa hela texten


R. Paul Thompson, The Quarterly Review of Biology This is a well-written book in which a novel and insightful theory of moral progress is developed. The analysis is rich and the research on which it rests is extensive. This will be of interest to students and researchers concerned with the interface of ethics and evolution, philosophy of biology, evolutionary psychology, and the importance of moral progress.


Toni Rnnow-Rasmussen, Metascience Buchanan and Powell's rich book will justly be of interest to a broad variety of readers, philosophers as well as non-philosophers ... an illuminating book on a vitally important and intriguing topic.


Konrad Szocik, European Society for the Study of Science and Theology It seems that the book discussed might be regarded as obligatory reading for everyone interested in the idea of moral progress, but also for those who as-sume that the evolutionary past strongly affects - usually in a negative way - our current moral intuitions and patterns.


Toni Ronnow-Rasmussen, Metascience an illuminating book on a vitally important and intriguing topic.


Jeroen Hopster, Utrecht University, Marx & Philosophy Review of Books This book is neither about Marx nor Marxism, yet it will be of interest to any reader who, like Marx, is interested in the phenomenon of progress, and the material conditions that underlie it. Allen Buchanan and Russell Powell, philosophers with respective specializations in the fields of ethics and the philosophy of biology, offer a novel 'biocultural' theory of the conditions amenable to moral progress, and take issue with so-called 'evoconservative' views
according to which our evolved psychology imposes severe constraints on the possibility of progress [...] Especially illuminating about Buchanan and Powell's biocultural theory is their analysis of the conditions that are likely to lead to an inclusivist moral response, and those likely to lead to moral
exclusivism.


Michael Brownstein and Daniel Kelly, The British Journal of Philosophy of Science A compelling, well-researched, and timely book. It articulates arguably the most persuasive naturalistic theory of moral progress to date, and lays the groundwork for important and impactful research.


Allan Gibbard, Notre Dame Philosophical Reviews This is a marvelous book...none of my worries about how to develop their proposals further lessen to any substantial degree my enthusiasm for their book [which] is remarkable in bringing us as I hope closer to a point where we can sketch and begin to confirm the kind of account they seek.