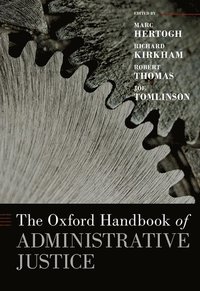 The Oxford Handbook of Administrative Justice

Marc Hertogh is Full Professor of Socio-Legal Studies at the University of Groningen. He is also Editor-in-Chief of the International Journal of Law in Context (Cambridge University Press) and a former associate research fellow at the Centre for Socio-Legal Studies (University of Oxford). His research focuses on public opinion about law, with a special interest in legal consciousness, legal pluralism, and administrative justice. He has written widely on these subjects, including the Research Handbook on the Ombudsman (with Richard Kirkham) (Edward Elgar, 2018) and Judicial Review and Bureaucratic Impact (with Simon Halliday) (CUP, 2004). His work has been published in leading journals such as Law and Policy, Journal of Law and Society, Social & Legal Studies, and Jurisprudence. His work is frequently cited by policymakers; and he has been an adviser to the Ministry of Justice, the Ministry of the Interior, the National Ombudsman, and the Public Prosecution Service. At present, he is a member of the Scientific Advisory Board of the Council for the Judiciary and a member of the Council for Responsive Government (Ministry of the Interior). Richard Kirkham is a Senior Lecturer in Public Law at the University of Sheffield. Previously, he studied Law at Southampton University (LLB), Socio-Legal Studies (MA) and a PhD at the University of Sheffield. He is a recognised national and international authority on the ombudsman institution. He has written widely on the topic, including The Ombudsman Enterprise and Administrative Justice http://www.ashgate.com/isbn/9780754675563 (with Trevor Buck and Brian Thompson (Ashgate, 2011)), The Research Handbook on the Ombudsman (with M. Hertogh) (Edward Elgar, 2018) and A Manifesto for Ombudsman Reform (with C. Gill) (Palgrave MacMillan, 2020). In 2013, he was the lead author on an independent report commissioned to review the work of the Local Government Ombudsman in England: External Evaluation of the Local Government Ombudsman. In 2013 he also conducted an evaluation of the Gibraltar Ombudsman scheme: A Review of the Gibraltar Public Services Ombudsman. He is also the editor of the Ombudsman, Administrative Justice and Tribunals Section in the Journal of Social Welfare and Family Law. Robert Thomas is Professor of Public Law (appointed 2011). His research focuses on administrative law. His book Administrative Justice and Asylum Appeals (2011) was awarded first prize by the Society of Legal Scholars Peter Birks Prize for Outstanding Legal Scholarship in 2011. Robert has acted as a specialist adviser to the House of Commons Constitutional Affairs Select Committee (2003-04). He is a member of the Administrative Justice Council and co-chairs its Academic Panel. Robert has been awarded research funding by the Nuffield Foundation and the Economic and Social Research Council to fund empirical legal research into aspects of administrative law including immigration judicial reviews and administrative review processes. He has also undertaken consultancy work in China, Japan, and Serbia on the development and design of administrative law in those countries. Robert is a visiting fellow at the Universite Catholique de Louvain, Belgium. Joe Tomlinson is Senior Lecturer in Public Law at the University of York. Prior to joining York in 2019, he held lectureships in Public Law at King's College London and the University of Sheffield. He has also held visiting posts at Melbourne Law School and Osgoode Hall Law School. Through the application of his research, he is involved in the active development of policy and practice. His work has been cited by the UK Supreme Court, relied on in significant public law litigation (including R (on the application of Miller) v The Prime Minister and Cherry and others v Advocate General for Scotland [2019] UKSC 41 and RR v Secretary of State for Work and Pensions [2019] UKSC 52), cited in both the House of Lords and House of Commons, and has formed the basis of a Law C