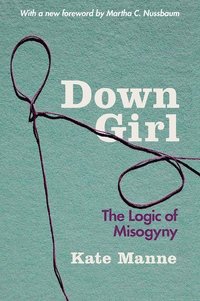 The Logic of Misogyny

av Kate Manne
Häftad Engelska, 2019-05-01
176
Köp
Spara som favorit
Finns även som
Visa alla 4 format & utgåvor
Down Girl is a broad, original, and far ranging analysis of what misogyny is and how it works. The philosopher Kate Manne argues that modern society's failure to recognize women's full humanity and autonomy is not actually the problem. She argues instead that it is women's manifestations of human capacities autonomy, agency, political engagement is what engenders misogynist hostility.
Visa hela texten

Thomas E. Randall, Hypatia Reviews Down Girl leaves the reader wanting more, and Manne eagerly invites both scholars and her general audience to fill in those gaps. Rich conversations and literatures will surely follow in this book's wake.


Martha C. Nussbaum, School of Law and Department of Philosophy, University of Chicago Despite its somber topic, Kate Manne's Down Girl made me very happy, exhilarated indeed by its insight, analytical clarity, and committed engagement with a major issue of justice. I've been thinking and teaching about sexism and misogyny for a long time, but this book opened up fresh perspectives, for example in its convincing distinction between sexism as a set of beliefs and misogyny as an enforcement strategy. Each thoughtful person will have her own
sense of where to locate the root of injustice to women, but Manne's cogent argument that misogyny is primarily about the demand that women give support, service, and care is surely at least one big part of the story of our turbulent times.


Toril Moi, Duke University Persuasively defining 'misogyny' as hostile, demeaning, shaming, and punitive treatment of women, Down Girl brings out the misogynist logic of contemporary culture with wit and urgency. In this book 'misogyny' emerges as the law enforcement branch of patriarchy, and thus as a concept that fully deserves a place alongside 'patriarchy' and 'sexism' as a fundamental tool for feminist analysis. Combining conceptual clarity with passionate commitment, Down
Girl is indispensable reading for anyone who wishes to understand the ugly strand of hostility to women that has surfaced in recent years in our so-called advanced Western societies.


Sarah Song, University of California, Berkeley Kate Manne has written a deeply moving and powerful book. It is politically engaged philosophical analysis at its best.


John Tasioulas, King's College London Manne's important new book deploys the tools of analytic moral philosophy to construct an arresting account of the logic of misogyny. It is sure to become a key reference point for future discussions of this vital, but hitherto sadly neglected, topic.


if depressing Manne offers us a deep, insightful, and thought-provoking


Carlos Lozada, The Washington Post
Manne's Down Girl: The Logic of Misogyny is excruciatingly well-timed, providing a theoretical framework for a phenomenon baring itself before us, perverse and pervasive... Down Girl reminds us that while revealing individual misogynists is hard, uprooting misogyny is much harder.


Lilian Calles Barger, Society for US Intellectual History Manne brings a fresh analysis to our assumed understanding of misogyny and the related term sexism. As a feminist and moral philosopher... not a single book or article-length treatment [in the field] had been devoted to unpacking what...

Kate Manne is an assistant professor of philosophy at Cornell University, having previously been a junior fellow at the Harvard Society of Fellows from 2011-2013. She works in moral, social, and feminist philosophy. Her work has appeared in The New York Times, The Times Literary Supplement, The Chronicle of Higher Education, The Huffington Post, and The New Philosopher, as well as academic journals. Her lead essay for a forum on misogyny in The Boston Review was one of their '25 most-loved essays' for 2016. She has also been a winner of the American Philosophical Association (APA)'s annual op-ed contest.