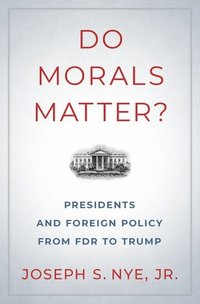 av Joseph S Nye
Inbunden Engelska, 2020-03-23
219
Köp
Spara som favorit
Skickas inom 7-10 vardagar.
Fri frakt inom Sverige för privatpersoner.
What is the role of ethics in American foreign policy? The Trump Administration has elevated this from a theoretical question to front-page news. Should ethics even play a role, or should we only focus on defending our material interests? In Do Morals Matter? Joseph S. Nye provides a concise yet penetrating analysis of how modern American presidents have-and have not-incorporated ethics into their foreign policy. Nye examines each presidency during the
American era post-1945 and scores them on the success they achieved in implementing an ethical foreign policy. Alongside this, he evaluates their leadership qualities, explaining which approaches work and which ones do not.
Visa hela texten

Walter Isaacson, Distinguished Fellow and Former CEO, Aspen Institute, and Professor of History, Tulane University In times like these, it is important to appreciate the role that moral reasoning should play in foreign policy. This is especially true in a democracy, where sustaining global involvement requires support from citizens. Joe Nye is one of our foremost and engaging analysts of American diplomacy, and in this book he provides a clear-eyed guide for reengaging our moral compass.


O.A. Westad, Yale University From the doyen of US foreign policy thinkers, a powerful warning against domestic populist politics, which not only narrow our moral vision but defeat US purposes around the world.


David Gergen, CNN Senior Political Analyst, and Founding Director, Harvard Kennedy School Center for Public Leadership With characteristic insight and precision, Joseph Nye raises tough questions of how much ethics should shape a nation's foreign policy, provides a sweeping review of how past presidents have embraced or rejected ethical imperatives, and constructs a helpful scorecard for judging future presidents. This book takes on even greater significance as a growing number of nations -led by the U.S.- nakedly put self interest first.


Robert O. Keohane, Princeton University In Do Morals Matter? Joseph S. Nye argues persuasively that in foreign policy, good intentions must be accompanied by the use of appropriate means that generate beneficial consequences. His astute analysis of American presidents since World War II demonstrates that contextual intelligence is crucial for moral principles to yield good results.


Margaret MacMillan, Emeritus Professor of International History, University of Oxford A lucid, thoughtful and original examination of the role morality plays as American presidents shape their foreign policy. As Professor Nye shows convincingly in this highly readable book, leaders and citizens alike make assumptions, decisions and judgments which reflect their own views about what is good and bad. Yet again he has contributed much to our better understanding of international relations.

Joseph S. Nye, Jr. is University Distinguished Service Professor Emeritus and former Dean of Harvard's Kennedy School of Government. He received his bachelor's degree summa cum laude from Princeton University, won a Rhodes Scholarship to Oxford, and earned a Ph.D. in political science from Harvard. He has served as Assistant Secretary of Defense for International Security Affairs, Chair of the National Intelligence Council, and a Deputy Under Secretary of State. His most recent books include The Powers to Lead, The Future of Power, Presidential Leadership and the Creation of the American Era, and The Power Game: a Washington Novel. He is a fellow of the American Academy of Arts and Sciences, the British Academy, and the American Academy of Diplomacy. In a recent survey of international relations scholars, he was ranked as the most influential scholar on American foreign policy, and in 2011, Foreign Policy named him one of the top 100 Global Thinkers.