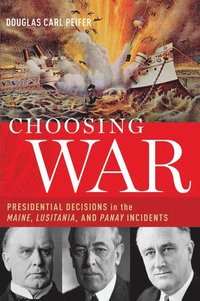 Presidential Decisions in the Maine, Lusitania, and Panay Incidents

Robert M. Brown, Military Review This work is very valuable to aspiring historians in its discussion of the uses of history....With at-sea incidents between U.S. and Iranian and Chinese ships on the rise, this book should be required reading for policymakers and national security professionals alike.


likely in vain [A]n excellent example of how historically informed comparative analysis can create a framework for our understanding of the uses of force and war-making....The gripping prose style and narrative detail in each episode are impressive....[O]ne can only hope


Dave Page, The Journal of America's Military Past [T]his book could appeal to someone who knows little about the three naval incidents and wants to get a relatively quick lesson on the historical background and the military and political considerations of each. It should also appeal to the enthusiast who really wants to get into the weeds of diplomacy with Peifer.


whether or not to go to war. Students of diplomatic, naval, and military history and those interested in the national security decision-making process will find Choosing War a valuable endeavor and a worthwhile addition to their professional libraries. Well researched and with extensive notes, Choosing War hits the mark. Peifer's insightful analysis in Choosing War is as useful as it is timely....Peifer makes a unique contribution to our understanding of how an American administration makes that most important of decisions


Larry Provost, MCU Journal Choosing War is an excellent dissection of the decisions made by American presidents in the wake of the Maine, Lusitania, and Panay incidents. Choosing War, in great detail, shows that naval incidents are very often a precursor to greater conflicts on land, on sea, and in the air....It is a unique book that is written clearly enough to serve as popular history, yet Choosing War will also serve as a great reference to
American military figures, geopolitical strategists, and their publicly elected leaders.


James C. Bradford, Texas A&M University, editor of America, Sea Power, and the World
Well-reasoned and convincing, Choosing War makes an important contribution to the fields of presidential studies and decision making. It also provides excellent examinations of three naval events and their link to foreign relations. Thus it will be of interest and value to both diplomatic and naval historians. There exists no similar study.


the Maine, the Lusitania, and the Panay Americans can choose their wars, or blunder into them. Douglas Peifer's insights into three moments of crisis and decision from the high seas


Washington Times
Presidents from Dwight Eisenhower to poor Barack Obama today have luxuriated in the certainty that we could project American force anywhere to solve any conflict that collided with our national interests. Mr. Peifer argues naval and air power no longer are adequate shortcuts to diplomacy.

Douglas Carl Peifer is a Professor of History and Strategy at the US Air War College in Montgomery, Alabama.