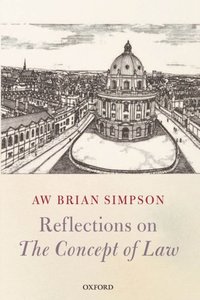 Reflections on 'The Concept of Law' (e-bok)

av A W Brian Simpson
E-bok (EPUB - DRM), Engelska, 2011-09-22
519
Ladda ned
Spara som favorit
Laddas ned direkt
Läs i vår app för iPhone, iPad och Android
Finns även som
Visa alla 2 format & utgåvor
HLA Hart's The Concept of Law is one of the most influential works of philosophy of the twentieth century, redefining the field of legal philosophy and introducing generations of students to philosophical reflection on the nature of law. Since its publication in 1961 an industry of academic research and debate has grown up around the book, disputing, refining, and developing Hart's work. Under the sheer volume of competing interpretations of the book theoriginal contexts - cultural and intellectual - that shaped Hart's project can be obscured. In this book, renowned legal historian AWB Simpson attempts to sweep aside the volumes of academic criticism and return to 'Troy I', revealing the world of post-war Oxford that produced Hart and his famous book. Drawing on his personal experience of studying and teaching in Oxford at the time Hart developed The Concept of Law, Simpson recreates with characteristic wit the social and intellectual culture of Oxford philosophy and the law faculty in the 1950s. He traces Hart's early work and influences, within and outside Oxford, showing how Hart developed his picture of philosophy and its potential for enriching the understanding of law. He also lays bare the painful shortcomings of post-warOxford academia, depicting a world of eccentric dons and intellectual Cyclopses - isolated and closed to broad, interdisciplinary exchange - arguing that Hart did not escape from the limitations of his intellectual world. Simpson's entertaining, and controversial, account of the world that produced The Concept of Law will be essential reading for all those engaged in interpreting and teaching the seminal book, and an engaging read for anyone interested in the history of Oxford philosophy and legal education.
Visa hela texten