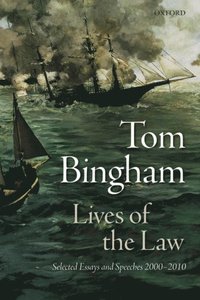 Lives of the Law E-bok

av Tom Bingham
E-bok (EPUB - DRM), Engelska, 2011-09-01
321
Ladda ned
Spara som favorit
Ladda ned och läs i en e-boksläsare. Tips på appar
Finns även som
Visa alla 2 format & utgåvor
Tom Bingham (1933-2010) was the 'greatest judge of our time' (The Guardian), a towering figure in modern British public life who championed the rule of law and human rights inside and outside the courtroom. Lives of the Law collects Bingham's most important later writings, in which he brings his distinctive, engaging style to tell the story of the diverse lives of the law: its life in government, in business, and in human wrongdoing. Following on from The Business of Judging (2000), the papers collected here tackle some of the major debates in British public life over the last decade, from reforming the constitution to the growth of human rights law. They offer Bingham's distinctive insight on issues such as the role of the judiciary in a democracy, the implementation of the Human Rights Act, and the development of the rule of law, in the UK and internationally. Written in the accessible style that made The Rule of Law (2010) a popular success, the book will be essential reading for all those working in law, and an engaging inroad to understanding modern constitutional and legal debates for the general reader.
Visa hela texten