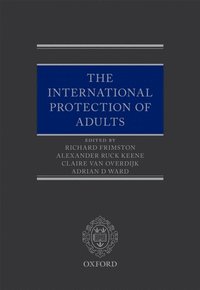 av Richard Frimston, Alexander Ruck Keene, Claire Van Overdijk, Adrian Ward Mbe
E-bok (PDF - DRM), Engelska, 2015-03-26
3410
Ladda ned
Spara som favorit
Laddas ned direkt
Läs i vår app för iPhone och iPad
Finns även som
Visa alla 2 format & utgåvor
Increasing numbers of people have connections with one country, but live and work in another, frequently owning property or investments in several countries. People with lifelong or subsequently developed impairments of capacity move cross-border or have property or family interests or connections spread across different jurisdictions. This new work fills a gap in a specialist market for a detailed work advising lawyers on all the considerations in these situations. The book provides a clear, comprehensive, and unique overview of all relevant capacity and private international law issues, and the existing solutions in common law and civil law jurisdictions and under Hague Convention XXXV. It sets out the existing law of various important jurisdictions, including detailed chapters on the constituent parts of the UK, Ireland, Jersey, the Isle of Man and the Hague 35 states; and shorter chapters on 26 Non-Hague states and those within federal states,including coverage of the United States, several Australian and Canadian states, and a number of other Commonwealth jurisdictions. Containing a number of helpful case studies and flowcharts, the book draws upon the expertise of the editors in their respective fields, together with detailed contributions fromexpert practitioners and academics from each relevant jurisdiction. All the editors and many of the contributors and correspondents are members of STEP.
Visa hela texten