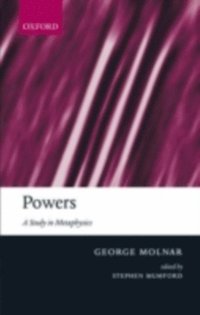 A Study in Metaphysics

av George Molnar, Stephen Mumford
E-bok (PDF - DRM), Engelska, 2006-11-30
439
Ladda ned
Spara som favorit
Laddas ned direkt
Läs i vår app för iPhone, iPad och Android
Finns även som
Visa alla 2 format & utgåvor
George Molnar came to see that the solution to a number of the problems of contemporary philosophy lay in the development of an alternative to Hume's metaphysics. This alternative would have real causal powers at its centre. Molnar set about developing a thorough account of powers that might persuade those who remained, perhaps unknowingly, in the grip of Humean assumptions. He succeeded in producing something both highly focused and at the same time wide-ranging. Heshowed both that the notion of a power was central and that it could serve to dispel a number of long-standing philosophical problems. Molnar's account of powers is as realist as any that has so far appeared. He shows that dispositions are as real as any other properties. Specifically, they do not depend for their existence on their manifestations. Nevertheless, they are directed towards such manifestations. Molnar thus appropriates the notion of intentionality, from Brentano, and argues that it is the essential characteristic of powers. He offers a persuasive case for there being some basic and ungrounded powers, thus rulingout the reducibility of the dispositional to the non-dispositional. However, he does allow that there are non-power properties as well as power properties. In this respect, his final position is dualistic. This is contemporary metaphysics of the highest quality. It is a work that was almost complete when its author died. It has been edited for publication by another specialist in the subject, Stephen Mumford, who has also provided an introduction that will allow non-specialists to become acquainted with the issues. David Armstrong, one of the greatest living metaphysicians and personal friend of George Molnar, has provided a Foreword.
Visa hela texten