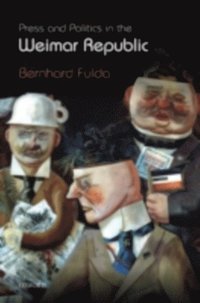 Press and Politics in the Weimar Republic (e-bok)

av Bernhard Fulda
E-bok (PDF - DRM), Engelska, 2009-01-08
1589
Ladda ned
Spara som favorit
Laddas ned direkt
Läs i vår app för iPhone, iPad och Android
Finns även som
Visa alla 1 format & utgåvor
Press and Politics offers a new interpretation of the fate of Germany's first democracy and the advent of Hitler's Third Reich. It is the first study to explore the role of the press in the politics of the Weimar Republic, and to ask how influential it really was in undermining democratic values. Anyone who seeks to understand the relationship between the press and politics in Germany at this time has to confront a central problem. Newspapers certainly told their readers how to vote, especially at election time. It was widely accepted that the press wielded immense political power. And yet power ultimately fell to Adolf Hitler, a radical politician whose party press had been strikingly unsuccessful. Press and Politics unravels this apparent paradox by focusing on Berlin, the political centre of the Weimar Republic and the capital of the German press. The book examines the complex relationship between media presentation, popular reception, and political attitudes in this period. What was the relationship between newspaper circulation and electoral behaviour? Which papers did well, and why? What was the nature of political coverage in the press? Who was most influenced by it?Bernhard Fulda addresses all these questions and more, looking at the nature and impact of newspaper reporting on German politics, politicians, and voters. He shows how the press personalized politics, how politicians were turned into celebrities or hate figures, and how - through deliberate distortions -individual newspapers succeeded in building up a plausible, partisan counter-reality.
Visa hela texten

Bloggat om Press and Politics in the Weimar Republic