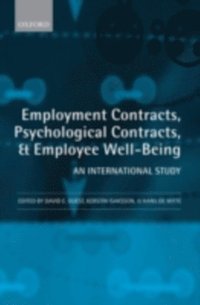 av David E Guest, Kerstin Isaksson, Hans De Witte
E-bok (PDF - DRM), Engelska, 2010-07-22
1249
Ladda ned
Spara som favorit
Laddas ned direkt
Läs i vår app för iPhone och iPad
Finns även som
Visa alla 1 format & utgåvor
Temporary employment has become a focus of policy debate, theory, and research. The book addresses as its core concern the relationship between temporary employment contracts and employee well-being. It does so within the analytic framework of the psychological contract, and advances theory and knowledge about the psychological contract by exploring it from a variety of perspectives. It also sets the psychological contract within the context of a range of otherpotential influences on work-related well-being including workload, job insecurity, employability, and organizational support. A key aim of the book is to identify the relative importance of these various potential influences on well-being. The book covers seven countries; Belgium, Germany, The Netherlands, Spain, Sweden and the UK, as well as Israel as a comparator outside Europe. Data were collected from over 5,000 workers in over 200 organizations; and from both permanent and temporary workers as well as from employers. The book's conclusions are interesting and controversial. The central finding is that contrary to expectations, temporary workers report higher well-being than permanent workers. As expected, a range of factors help to explain variations in work-related well-being and the research highlights the important role of the psychological contract. However, even after taking into account alternative explanations, the significant influence of type of employment contract remains, with temporary workersreporting higher well-being. In addition to this core finding, by exploring several aspects of the psychological contract, and taking into account both employer and employee perspectives, the book sheds new light on the nature and role of the psychological contract. It also raises some challengingpolicy questions and while acknowledging the potentially precarious nature of temporary jobs, highlights the need to consider the increasingly demanding nature of permanent jobs and their effects on the well-being of employees.
Visa hela texten