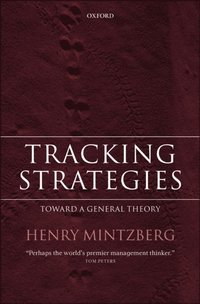 Toward a General Theory

av Henry Mintzberg
E-bok (EPUB - DRM), Engelska, 2007-11-08
699
Ladda ned
Spara som favorit
Laddas ned direkt
Läs i vår app för iPhone, iPad och Android
Finns även som
Visa alla 2 format & utgåvor
There is a great deal of practice, discussion, and publication about strategy, but surprisingly little investigation of the processes by which strategies actually form in organizations. Henry Mintzberg, one of the world's leading thinkers and writers on management, has over several decades examined the processes by which strategies have formed in a variety of contexts, and this book collects together his findings. Defining realized strategy - the strategy an organization has actually pursued - as a pattern in a stream of actions, this investigation tracked strategies in organizations over long periods of time, usually three or four decades, and in one case, a century and a half. This revealed the patterns by which strategies form and change in organizations, the interplay of 'deliberate' with 'emergent' strategies, and the relationships between leadership, organization, and environment in the strategyformation process. An introductory chapter considers the term strategy, and the various ways it has been and can be used, and then introduces the studies. These are reported in the next ten chapters, with descriptions and conclusions about the strategies were formed over time, and how they combined to establish periods in the history of the organization. These studies range across business (six studies), government (two studies), an architectural firm, and a university, as well as one professor in that university. They include U.S. strategy in Vietnam (1950-1973), Volkswagenwrk (1937-1972), and the National Film Board of Canada (1939-1975). The final chapter, entitled 'Toward a General Theory of Strategy Formation', weaves these findings together in two themes. First is strategy formation in different forms of organization: Strategic Planning in the Machine Organization, Strategic Visioning in the Entrepreneurial Organization, Strategic Learning in the Adhocracy Organization, and Strategic Venturing in the Professional Organization. The second theme considers stages in the formation of strategies, from Initiation throughDevelopment to Renewal.
Visa hela texten