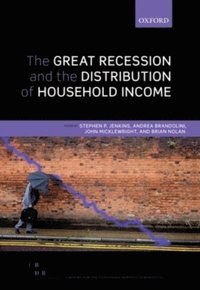 Great Recession and the Distribution of Household Income E-bok

av Stephen P Jenkins, Andrea Brandolini, John Micklewright, Brian Nolan
E-bok (PDF - DRM), Engelska, 2012-12-20
1199
Ladda ned
Spara som favorit
Laddas ned direkt
Läs i vår app för iPhone, iPad och Android
Finns även som
Visa alla 1 format & utgåvor
The so-called Great Recession that followed the global financial crisis at the end of 2007 was the largest economic downturn since the 1930s for most rich countries. To what extent were household incomes affected by this event, and how did the effects differ across countries?This is the first cross-national study of the impact of the Great Recession on the distribution of household incomes. Looking at real income levels, poverty rates, and income inequality, it focusses on the period 2007-9, but also considers longer-term impacts. Three vital contributions are made. First, the book reviews lessons from the past about the relationships between macroeconomic change and the household income distribution. Second, it considers the experience of 21 rich OECD membercountries drawing on a mixture of national accounts, and labour force and household survey data. Third, the book presents case-study evidence for six countries: Germany, Ireland, Italy, Sweden, the UK, and the USA. The book shows that, between 2007 and 2009, government support through the tax and benefitsystem provided a cushion against the downturn, and household income distributions did not change much. But, after 2009, there is likely to be much greater change in incomes as a result of the fiscal consolidation measures that are being put into place to address the structural deficits accompanying the recession. The book's main policy lesson is that stabilisation of the household income distribution in the face of macroeconomic turbulence is an achievable policy goal, at least in theshort-term.
Visa hela texten