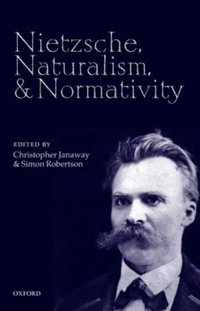 av Christopher Janaway, Simon Robertson
E-bok (PDF - DRM), Engelska, 2012-09-27
839
Ladda ned
Spara som favorit
Laddas ned direkt
Läs i vår app för iPhone, iPad och Android
Finns även som
Visa alla 1 format & utgåvor
Nietzsche, Naturalism, and Normativity comprises ten original essays which critically engage with one of the western canon's most controversial ethical thinkers. Bringing together an internationally renowned line-up of Nietzsche specialists and mainstream moral philosophers, the volume provides a timely and distinctive contribution to our understanding of both Nietzsche and his significance for ethical thought more generally. As well as clarifyingNietzsche's own views, both critical and positive, ethical and meta-ethical, the articles connect Nietzsche's philosophical concerns to contemporary debates in and about ethics, normativity, and value. The volume's topics include: the nature and scope of Nietzsche's critique of morality; the character of the positiveideals Nietzsche advances in light of that critique; the meta-ethical commitments underpinning the substantive views he variously opposes and espouses; his conception of human psychology and its relation to normativity and value; and, more generally, the relation between Nietzsche's revaluative ambitions and the naturalistic worldview it has become common to attribute to him. With an editors' introduction providing a comprehensive and accessible background to these topics, including astate-of-the-art overview of the interpretative and philosophical controversies Nietzsche's normative and naturalistic endeavours raise, Nietzsche, Naturalism, and Normativity stands at the cutting edge of current work in the field and is essential reading for anyone interested in the challenges Nietzscheposes for dominant models of moral philosophy.
Visa hela texten