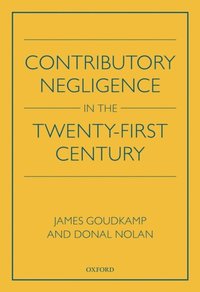 av James Goudkamp, Donal Nolan
E-bok (EPUB - DRM), Engelska, 2019-04-04
1329
Ladda ned
Spara som favorit
Laddas ned direkt
Läs i vår app för iPhone och iPad
Finns även som
Visa alla 2 format & utgåvor
Despite the centrality of the contributory negligence doctrine in practice, almost nothing is known about how it functions in reality. The authors, seeking to fill this deficit in understanding, have undertaken a wide-ranging empirical study of how the doctrine is handled by the courts. They report their methodology and findings in this volume, framing their discussion within the law of contributory negligence. The study is based on 572 first instance decisions on contributory negligence from across the United Kingdom decided between 2000 and 2016, and 129 appellate decisions handed down in the same period. The analysis considers the operation of the contributory negligence doctrine at first instance and on appeal, and in a range of contextual settings, including road accidents, accidents at work, and professional negligence claims. The authors also consider how the study can be used to inform futuredevelopments in this area of law. Substantial appendices set out the key data on which the book is based, enabling academics to utilize the dataset in their own research and allowing practitioners to compare their cases easily with previously decided claims.
Visa hela texten