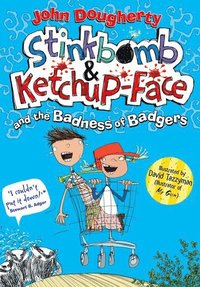 Stinkbomb & Ketchup-Face and the Badness of Badgers

Charlotte, aged 9 I thought this book was hilarious. I read it in one go as the story was so funny. Warning: Side effects include tears of laughter, crazy laughing and aching cheeks! This book must be read in one go as it is so good and you won't be able to put it down.

Sian Downs, Year 4 teacher We have just the last chapter to go. The class love it and wouldn't let me put it down.

Sally Batten I had to read this after hearing Owen laughing so much! This book should come with a warning - Be careful, this book will make you want to read aloud to strangers just to show how funny it is!

Parents in Touch Even reluctant readers will be drawn in by the amusing pictures and the good use of varied font styles which makes the book appealing and not in the least daunting. Great fun, especially when read aloud.


Katie Clapham, Booktrust This wonderfully zany story is perfectly paired with the scratchy stylings of David Tazzyman; ensuring fans of Mr Gum will be drawn to this story is a smart move. Sharp wit and genuinely funny storytelling keep everything moving along at a rattling speed. It's a short read, perfect for primary schools and could enchant a few reluctant older readers too. Clever, surprising and satisfyingly silly.


Alex O'Connell, The Times Children's Book of the Week Dougherty is very funny and I like an adventure that has a natter with itself, a postmodern novel for tweens... due to the novel's clever storytelling - you don't need to be Terry Eagleton to appreciate it.

Kathy Lindsay, The School Librarian Laugh out loud humour with some wonderful illustrations from David Tazzyman... make this a super read.

Minerva Reads Blog ... a gigglefest from start to finish.

John Dougherty was born in Larne, Northern Ireland. He studied psychology at university and then tried his hand at a number of jobs including YMCA hostel worker, factory machine operator, and unsuccessful singer-songwriter, before becoming a primary school teacher. Whilst John was teaching, his interest in children's literature was reawakened and he soon began writing stories and pestering publishers with them. After the publication of Zeus on the Loose in 2004 he left teaching and took up writing full-time, only with more tea breaks. His books have been shortlisted for a number of prestigious awards - and one was chosen by The Times as one of the Best Children's Books of the Year 2011 - but, more importantly, they make children giggle. David Tazzyman grew up in Leicester, studied illustration at Manchester Metropolitan University, and then travelled around Asia for three years before moving to London in 1997. He is the acclaimed illustrator of the Mr Gum books by Andy Stanton, as well as other children's titles including the Agatha Parrott and Donut Diaries books.