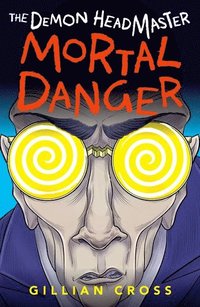 av Gillian Cross
Häftad Engelska, 2019-02-07
75
Köp
Spara som favorit
Skickas inom 10-15 vardagar.
Fri frakt inom Sverige över 159 kr för privatpersoner.
Kan levereras innan jul!
There's a new head teacher at Lizzie's school, and she's great! She encourages the pupils to follow their passions, and there's even a competition to win an adventure trip to an exciting remote island! But someone is waiting for them there. And once he lays his eyes on them, there will be no escape . . .
Visa hela texten

Daily Telegraph Gillian Cross is one of the best children's novelists today and her stories of the Demon Headmaster are both fun and quite frightening.

Financial Times Review for The Demon Headmaster: Total Control
This is something of a reboot for the series, since aside from the title character none of the cast from the past six books returns. Ofsted rating? Outstanding.

Gillian Cross has been writing children's books for over thirty years. Before that, she took English degrees at Oxford and Sussex Universities, and she has had various jobs including working in a village bakery and being an assistant to a Member of Parliament. She is married with four children and lives in Dorset. Her hobbies include orienteering and playing the piano. She won the Carnegie Medal for Wolf and the Smarties Prize and the Whitbread Children's Novel Award for The Great Elephant Chase.