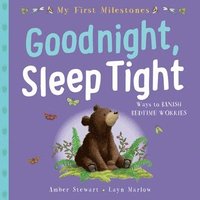 av Amber Stewart
Häftad Engelska, 2018-05-03
79
Köp
Spara som favorit
Button is a little bear. When it comes to bedtime, sometimes he worries about having bad dreams. In this heart-warming story, Daddy knows just what to do to soothe Button's fears and help him get to sleep. Part of a charming series of picture books that explore important toddler milestones.
Visa hela texten

Amber Stewart spent her early childhood in London and moved to rural Dorset as a teenager. She graduated from University College London with a degree in Russian language and literature and began an ongoing career in children's book publishing. Amber commutes daily to London from an old farmhouse in Buckinghamshire where she lives with her husband and a menagerie of ponies, cats and dogs. Layn Marlow grew up in Essex. After studying history of art at Reading University, Layn began her career working in libraries. She lived in Belgium for several years but it was on her return to the UK that she enrolled as a mature student at Southampton University and received a first class degree in illustration. Layn now lives in Berkshire with her husband, two children, a hamster and a goldfish. For relaxation she loves listening to the radio, knitting and karate!