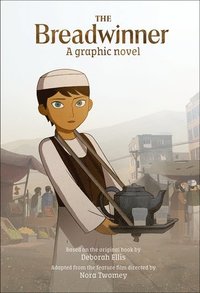 av Deborah Ellis
Häftad Engelska, 2018-05-03
89
Köp
Spara som favorit
Skickas inom 7-10 vardagar.
Gratis frakt inom Sverige över 159 kr för privatpersoner.
This beautiful graphic-novel adaptation of The Breadwinner animated film tells the story of eleven-year-old Parvana who must disguise herself as a boy to support her family during the Taliban's rule in Afghanistan.
Deborah Ellis's original novel, The Breadwinner, has been an international bestseller for more than 15 years.
Visa hela texten

Book Links [The books in the Breadwinner series] are terrifying indictments of what war can bring to children and a powerful testament to the ingenuity and strength of young people in times of terror.

Deborah Ellis is best known for her Breadwinner series, which has been published in twenty-five languages and has earned more than GBP1 million in royalties to benefit Canadian Women for Women in Afghanistan and Street Kids International. She has won the Jane Addams Children's Book Award, the University of California's Middle East Book Award, the Governor General's Award, the Ruth Schwartz Award, Sweden's Peter Pan Prize, and the Vicky Metcalf Award for a Body of Work. She has received the Ontario Library Association's President's Award for Exceptional Achievement, and she has been named to the Order of Canada.