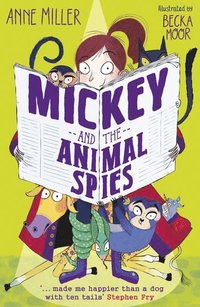 Mickey and the Animal Spies

Anne Miller is a scriptwriter and researcher for QI and co-authored 2016's 1,342 QI Facts To Leave You Flabbergasted and the forthcoming 1,423 QI Facts To Bowl You Over (Faber). Her favourite QI facts are that baby puffins are called pufflings and that there is a Starbucks inside the CIA but they don't write people's names on the cups. Anne is also the Head Researcher of Radio 4's The Museum of Curiosity, reached the semi-finals of BBC 2's fiendishly difficult quiz Only Connect and has two Blue Peter badges. Becka Moor studied Illustration for Children's Publishing in the North of Wales at Glyndwr University. She has since moved back home to Manchester where she works under the strict supervision of two very mischievous cats, doodling away and drinking far too much coffee.