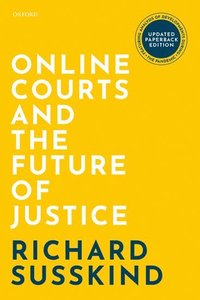 Online Courts and the Future of Justice

Professor Richard Susskind OBE is an author, speaker, and independent adviser to international professional firms and national governments. He is President of the Society for Computers and Law, IT Adviser to the Lord Chief Justice of England, and Chair of the Advisory Board of the Oxford Internet Institute. His numerous books include the best-sellers, The End of Lawyers? (OUP, 2008) and Tomorrow's Lawyers (OUP, 2013), his work has been translated into more than 10 languages, and he has been invited to speak in over 40 countries.