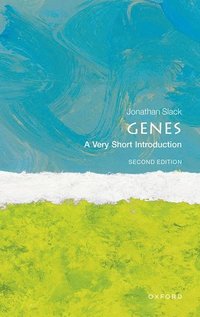 av Jonathan Slack
Häftad Engelska, 2023-04-27
100
Bevaka
Spara som favorit
Ännu ej utkommen – klicka "Bevaka" för att få ett mejl så fort boken boken går att köpa.
Finns även som
Visa alla 1 format & utgåvor
In this Very Short Introduction to the gene Jonathan Slack explores the discovery, nature, and role of genes in evolution and development. Looking at how genes are understood as a concept, the nature of genetic variation, and how their mutation can lead to disease, this is an ideal guide for anyone curious about what genes are and how they work.
Visa hela texten

Jonathan Slack studied at Oxford and Edinburgh Universities. His specialities are embryonic development and stem cell biology. While working for the Imperial Cancer Research Fund he discovered the first inducing factor controlling embryonic development. He was Head of the Department of Biology and Biochemistry at the University of Bath from 2000-2006 and Director of the Stem Cell Institute at the University of Minnesota from 2007-2012. He is an elected member of the European Molecular Biology Organization (EMBO), was awarded the Waddington Medal of the British Society for Developmental Biology in 2002 and elected a Fellow of the UK Academy of Medical Sciences (FMedSci) in 2004. He is author of Stem Cells: A Very Short Introduction (2021, OUP).