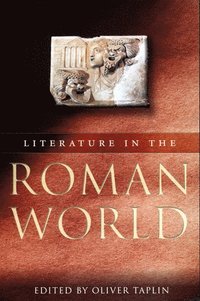 Literature in the Roman World

av Oliver Taplin
Häftad Engelska, 2001-08-01
379
Köp
Spara som favorit
Skickas inom 10-15 vardagar.
Fri frakt inom Sverige för privatpersoner.
Beställ senast idag kl 17:30 för leverans innan jul!
This book consists of nine essays by six contributors exploring aspects of literature from the beginning of the Roman empire to the end of the classical era. The theme drawing the essays together is that appreciation of Roman literature can be informed and influenced by attending to the 'receivers' of the literature, and by consideration of what it was originally appreciated for.
Visa hela texten

<br>Oliver Taplin is Professor of Classical Languages and Literature at Oxford University, where he is a Tutorial Fellow at Magdalen College. He is also co-director (with Edith Hall) of the Archive of Performances of Greek and Roman Drama. His books include 'Homeric Soundings' (Oxford, 1992) and 'Comic Angels' (Oxford, 1993). He maintains the importance of reaching wider audiences, and has collaborated with various productions in radio, television, and the theatre.<br>

Introduction; LATIN LITERATURE; 1. Primitivism and Power: The beginnings of Latin literature; 2. Forging a national identity: Prose literature down to the time of Augustus; 3. Escapes from orthodoxy: Poetry of the late Republic; 4. Creativity out of chaos: Poetry between the death of Caesar and the death of Virgil; 5. Coming to terms with the Empire: Poetry of the later Augustan and Tiberian period; 6. The path between truculence and servility: Prose literature from Augustus to Hadrian; 7. Oblique politics: Epic of the imperial period; 8. Imperial space and time: The literature of leisure; 9. Culture wars: Latin literature from the second century to the end of the classical era; Further Reading; Chronology; Acknowledgements; Index