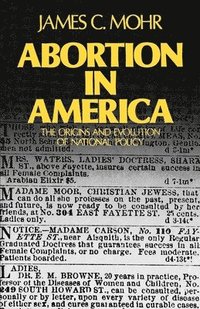 "A fascinating book which sets to rest a number of preconceptions on the subject. Easy to read and yet hard-hitting."--Marlette Rebhorn, ustin Community College<br> "Should be an eye-opener to those who think that religious objections were at the root of anti-abortion legislation and equally to those who think that abortion has been a matter of life and death."--Carl N. Degler, Stanford University<br> "A superb example of the way history can inform a current contentious controversy."--Journal of American History<br> "Mohr makes it abundantly clear that Supreme Court decisions of the 1970s were not a modern weakening of moral standards but a return to what Americans believed and practiced a hundred years ago."--The Christian Century<br> "An altogether lucid review of American abortion policy in the 19th century."--Christopher Lehmann-Haupt, The New York Times<br>