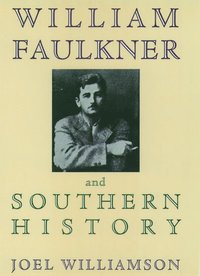 av Joel Williamson
Häftad Engelska, 1996-02-01
219
Köp
Spara som favorit
Skickas inom 10-15 vardagar.
Fri frakt inom Sverige för privatpersoner.
Finns även som
Visa alla 1 format & utgåvor
Faulkner more than any other writer is intimately associated with the South about which he wrote. This book reveals the man and his family and the ways in which southern culture and his own life were wound around one another in his greatest works.
Visa hela texten

Observer a rewarding piece of scholarship about a mysterious man

<br>Joel Williamson is Lineberger Professor in the Humanities at the University of North Carolina, Chapel Hill. He is one of our foremost historians of the South, and his classic work The Crucible of Race (1984) won five awards: the Parkman Prize by the Society of American Historians (for high literary quality), the Emerson Award by Phi Beta Kappa (for scholarship in the humanities), a Robert F. Kennedy Book Award, the Mayflower Cup, and the Owsley Prize of the Southern Historical Association (for the best book on the American South). It was also one of three books nominated for the Pulitzer Prize in History for 1984.<br>