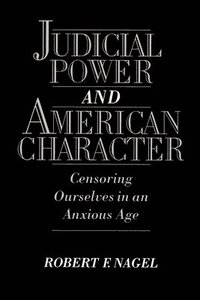 Censoring Ourselves in an Anxious Age

"Thought-provoking and well-written....For those interested in the ongoing debate over the role of judicial power in our system of government, this is a valuable book."American Political Science Review

"Professor Nagel's provocative book questions why an essentially undemocratic body like the Supreme Court should get the last word on the troubling moral issues of our day....An erudite argument."Commonweal

"The best analysis yet of the Court's method, and of the relation of its style to its purposes."Chronicle

"This is a major contribution to constitutional theory and practice, a significant work of social criticism, and a great pleasure to read. As for an originality of ideas, it is here in abundance. Professor Nagel writes from a perspective that pays enormous respect to the common understandings of society."Lee C. Bollinger, Provost, Dartmouth College

"A thoughtful essay on the role of the Supreme Court in our society....Highly recommended."Choice

About the Author: Robert F. Nagel is Ira Rothgerber, Jr., Professor of Constitutional Law at the University of Colorado and author of Constitutional Cultures: The Mentality and Consequence of Judicial Review (1989). He has written for the New Republic, Washington Monthly, Public Interest, Wall Street Journal, and the National Review.