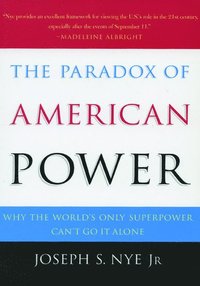 The Paradox of American Power

Why the World's Only Superpower Can't Go It Alone

av Joseph S Nye
Häftad Engelska, 2003-03-01
219
Köp
Spara som favorit
Skickas inom 10-15 vardagar.
Fri frakt inom Sverige för privatpersoner.
Finns även som
Visa alla 2 format & utgåvor
Not since the Roman Empire has any nation had as much economic, cultural, and military power as the United States does today. Yet, as has become all too evident through the terrorist attacks of September 11th and the impending threat of the acquisition of nuclear weapons by Iraq, that power is not enough to solve global problemslike terrorism, environmental degradation, and the proliferation of weapons of mass destructionwithout involving other nations. Here
Joseph S. Nye, Jr. focuses on the rise of these and other new challenges and explains clearly why America must adopt a more cooperative engagement with the rest of the world.
Visa hela texten

"This elegantly constructed essay is about why an unrivalled military and economic power still needs allies or partners, and why, as world leader, America should rely also on the soft, persuasive kind of power: the appeal of its values and culture."The Economist

"This reasoned and timely essay on the uses of power makes a valuable contribution to American public discourse."Publishers Weekly

"Joseph Nyeconsistently one of the wiser heads aroundhas produced, yet again, a lucid, forceful critique of American foreign policy and a sensible, far-sighted prescription for making American power more palatable and more effective around the world. In the wake of September 11, The Paradox of American Power could hardly be more timely. It reflects Nye's multiple experiences in government as well as his perspective as a scholar and thinker."Strobe
Talbott, Yale University

"Joe Nye is one of the most astute observers of the changing nature of international politics. His new book provides an excellent framework for viewing U.S. role in the 21st century and especially after the events of September 11."Madeleine Albright

"Before the book was finished the events of Sept. 11 came along and underscored his thesis.... If the United States is bound to lead, it is also bound to cooperate.... Nye argues that the interests of the international community are not illusory, that they are part and parcel of our national interests, which cannot be achieved without help from other nations.... There is no going it alone in a globalized world."H.D.S. Greenway, Boston Globe

"In lucid and concise prose, Joe Nye sums up the ambiguities and complexities of American power. He provides a valuable context for understanding how to maximize our strength and minimize our vulnerabilities in the post-September 11th world."Richard Holbrooke, United States Ambassador to the United Nations

"Could not be more timely.... Nye's objection to unilateralism, or realism in the sense used here, is not that they are conceptually insecure; his point is that they just don't work."New York Review of Books

<br>Joseph S. Nye, Jr., Dean of the Kennedy School of Government at Harvard, was Chairman of the National Intelligence Council and an Assistant Secretary of Defense in the Clinton administration. A frequent contributor to The New York Times, The Washington Post, and The Wall Street Journal, he is the author several books, including Governance in a Globalizing World and Bound to Lead: The Changing Nature of American Power.<br>