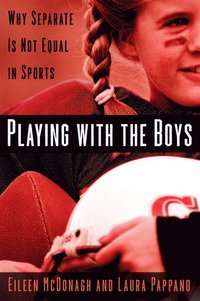 Playing With the Boys

Why Separate is Not Equal in Sports

"Playing with the Boys dismantles the common assumption that women must be inferior to men when it comes to sports. McDonagh and Pappano impressively show how this deep stereotype has no grounds and why it's so important we get rid of it."Donna Brazile, author of Cooking with Grease: Stirring the Pots in American Politics

"This is one of those rare gems of a book that makes you entirely reassess what you thought you knew. Provocative, absorbing and meticulously argued, Playing with the Boys questions the received wisdom about Title IX and women's sports from the most unexpected perspective. Read the book."Mary Fainsod Katzenstein, Stephen and Evalyn Milman Professor of American Studies, Cornell University and author of Faithful and Fearless: Moving Feminist Protest
inside the Church and Military

"McDonagh and Pappano hit a home-run! This book shows that coerced sex segregation in sports does not benefit women, and in fact holds back women who are fully capable of competing with menand that flies in the face of U.S. ideals of equality. Readers will never think of Title IX in the same way again."Kim Gandy, President, National Organization for Women (NOW)

"This is a wonderful work! It offers novel evidence from biology, history, and the law that makes us realize that women's sports are not only intrinsically interesting as a topic of study, but also a key part of larger debates about who we are as a society and a nation."Kristin Goss, Assistant Professor of Public Policy Studies and Political Science, Duke University and author of Disarmed: The Missing Movement for Gun Control in America

<br>Eileen McDonagh is Professor of Political Science at Northeastern University and Visiting Scholar at the Institute for Quantitative Social Science at Harvard University. She is the author of Breaking the Abortion Deadlock and The Motherless State. <br>Laura Pappano is an award-winning journalist whose work has appeared in The New York Times, The Boston Globe Magazine, Good Housekeeping, and The Washington Post. She is the author of The Connection Gap and is currently a writer-in-residence at the Wellesley Centers for Women at Wellesley College.<br>