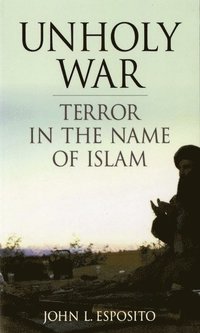 Terror in the Name of Islam

Köp
Spara som favorit
Kan levereras innan julafton!
Finns även som
Visa alla 3 format & utgåvor
The September 11 attacks on the World Trade Center and the Pentagon left us stunned, angry, and uncomprehending. As it became clear that these horrifying acts had been committed in the name of religion, the media, the government, and ordinary citizens alike sought answers to questions about Islam and its adherents.
In this level-headed and authoritative book, John L. Esposito, one of the world's most respected scholars of political Islam, provides answers. He clearly and carefully explains the teachings of Islamthe Quran, the example of the Prophet, Islamic lawabout jihad or holy war, the use of violence, and terrorism. He chronicles the rise of extremist groups and examines their frightening worldview and tactics. Anti-Americanism (and anti-Europeanism), he shows, is a broad-based phenomenon that
cuts across Arab and Muslim societies. It is not just driven by religious zealotry, but by frustration and anger at U.S. policy. It is vital to understand, however, that the vast majority of Muslims are appalled by the acts of violence committed in the name of their faith. It is essential that we
distinguish between the religion of Islam and the actions of extremists like Osama bin Laden, who hijack Islamic discourse and belief to justify their acts of terrorism. This brief, clear-sighted book reflects twenty years of study, reflection, and experience on the part of a scholar who is equally respected in the West and in the Muslim world. It will prove to be the best single guide to the urgent questions that have recently forced themselves on the attention of the entire world.
Visa hela texten

"In the quest to comprehend the Islamic world, few scholars have been as influential as John L. Esposito." Commentary

"Could not come at a more timely moment.... A model of direct, jargon-free prose that takes its readers on a tour d'horizon of the history of Islamic thought about the West, modernity and jihad."Peter L. Bergen, Washington Post Book World

"An invaluable book. Erudite, compelling and passionate, Unholy War is essential reading at this crisis of world history, and provides a lucid introduction to truths which must now become common knowledge."Karen Armstrong, author of Islam: A Short History

"Among the plethora of books published after the cataclysm of 9/11, Unholy War is one of the most insightful and informative in explicating the religious and political roots of the terrorism threat confronting the US."Choice

"Esposito has condensed the wealth of knowledge of the Islamic world evinced in his Oxford Illustrated History of Islam, producing a book that can admirably serve as an extremely valuable primer in this new world order in which communists have been replaced by terrorists as the planet's resident evil."Booklist

"Those who want a guide to the origins of the current clash of civilizations are unlikely to find a better book."Publishers Weekly

"In this engaging, evenhanded and highly readable book, one of America's foremost experts on contemporary Islam seeks to correct popular misconceptions about this faith.... This is essential reading for every concerned citizen and all those who wish to gain a deeper understanding of contemporary Islam and its internal struggles."Library Journal (starred review)

"A leading American authority on Islam offers a primer on modern varieties of terrorism and a well-reasoned plea for tolerance in a time of renewed Muslim-Western enmity.... A useful guidebook that should find a wide readership."Kirkus Reviews

"A masterly and indispensable guide to the bewildering array of militant groups that have erupted throughout the Muslim world. It should be required reading, because we can no longer afford to be ignorant of the causes of Muslim rage. A lucid and balanced account, it covers a huge canvas with elegance and economy."Karen Armstrong, Independent

"Unholy War advances an excellent argument in lucid language to masterfully interpret Islam and Muslim understandings of jihad and the context within which it becomes a source of instability. This book achieves its goal of educating the public with its exceedingly clear and an easy flowing style."Middle East Journal

<br>John L. Esposito is University Professor of Religion and International Affairs and Founding Director of the Prince Alwaleed Bin Talal Center for Muslim-Christian Understanding, Walsh School of Foreign Service, Georgetown University. A past president of the Middle East Studies Association, he is Editor-in-Chief of the four-volume Oxford Encyclopedia of the Modern Islamic World, Editor of The Oxford Illustrated History of Islam, and the author of numerous books, including Islam: The Straight Path and The Islamic Threat: Myth or Reality? His newest books include What Everyone Needs to KnowAbout Islam and The Oxford Dictionary of Islam. He lives in Washington, D.C.<br>