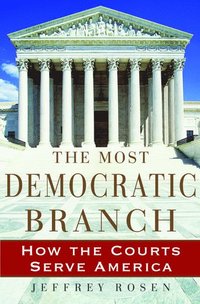 The Most Democratic Branch

How the Courts Serve America

av Jeffrey Rosen
Inbunden Engelska, 2006-06-01
389
Köp
Spara som favorit
Finns även som
Visa alla 2 format & utgåvor
Many critics attack federal judges as anti-democratic elitists, activists out of step with the mainstream of American thought. But others argue that judges should stand alone as the ultimate guardians of American values, placing principle before the views of the people. In The Most Democratic Branch, Jeffrey Rosen disagrees with both assertions. To illustrate, Rosen provides a penetrating look at some of the most important Supreme Court cases in American
history - cases involving racial equality, affirmative action, abortion, gay rights and gay marriage, the right to die, electoral disputes, and civil liberties in wartime. Rosen concludes that the judiciary works best when it identifies the constitutional principles accepted by a majority of Americans, and
enforces them unequivocally as fundamental law.
Visa hela texten

"A significant polemic from an important writer.... Rosen has emerged as the nation's most widely read and influential legal commentator."--Los Angeles Times<br> "A well-reasoned effort that raises provocative questions about how the Supreme Court might approach looming issues.... Rosen offers a thoughtful view of what has made Court pronouncements effective and how the Court can actually maintain its independence by following the mainstream of public opinion. His thesis is a model of common sense."--Publishers Weekly<br> "A compact, elegantly argued, and highly readable survey of American constitutional history."--Commonweal<br> "This book will be, and should be, widely read. The proper relationship of constitutional law to politics is one of the most controversial issues in American life today, and Rosen understands that relationship better than anyone. Filled with important insights--and real wisdom--The Most Democratic Branch is simply terrific. For those seeking a path out of the judicial polarization of the past decade, you need look no farther: Rosen shows the way."--William J. Stuntz, Harvard Law School<br> "Jeffrey Rosen defies everything you think you know about the court with a counter-intuitive argument of great power concerning both how the court has behaved in the past and how it should behave in the future. He attacks our heroic visions of the Supreme Court as a grand check against majority rule and recasts its general history as one of deference to the constitutional vision of majorities. Rosen's is a theory of adjudication for grown-ups; those at once concerned to limit judicial power and impatient with shrill doctrinal prescriptions for doing so. An important andimpressive work from one of America's most insightful legal commentators."--Benjamin Wittes, Editorial Writer, The Washington Post<br> "Jeffrey Rosen is America's most insightful public commentator on the Supreme Court and the Constitution. Beautifully written and persuasively argued, The Most Democratic Branch makes constitutional law accessible to ordinary citizens while simultaneously challenging legal experts to rethink their views on the Court's role in American democracy."--Michael J. Klarman, author of the Bancroft Prize-winning, From Jim Crow to Civil Rights<br> "There is no sharper critic of the Supreme Court than the New Republic's Jeffrey Rosen, and there is no finer ambassador between the planet of legal academia and that of the popular media.... Rosen's book is, like everything he writes, terrifically smart and useful and thought-provoking."--Slate<br> "Articulate and thoughtful."--The American Prospect<br> "Jeffrey Rosen makes a powerful and accessible case for a restrained judicial role, one that will challenge liberal proponents of Warren Court activism and conservative proponents of Rehnquist Court activism. His work combines sound historical scholarship with important prescriptions for contemporary constitutional politics."--Mark A. Graber, University of Maryland<br> "A well-written book that even most undergraduate students should be able to understand. The pace is swift enough that students should not lose interest.... The book should effectively stimulate discussions about the proper role of the courts."--Law and Politics Book Review<br>

Jeffrey Rosen is Professor of Law at George Washington University. Named by The Chicago Tribune as one of the best magazine journalists in America, he is the author of The Unwanted Gaze and The Naked Crowd, and his essays and commentaries have appeared in The New York Times Magazine, The AtlanticMonthly, The New Yorker, and The New Republic, where he is the Legal Affairs Editor.