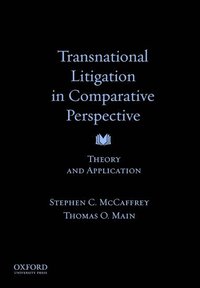 av Stephen McCaffrey
Inbunden Engelska, 2009-04-09
1540
Köp
Spara som favorit
Transnational Litigation in Comparative Perspective: Theory and Application is the only casebook that examines the principal issues in transnational litigation from a comparative perspective. Each chapter focuses on a particular core problem that all legal systems must address. The first half of each chapter is devoted to exploring the theoretical context of the issue, thereby enabling students to appreciate the complexity of the problem and to see how
achieving a resolution requires balancing competing interests. The second part of each chapter then focuses on how different systems deal with these challenges. Topics covered include protective measures, personal jurisdiction, forum non conveniens, forum selection clauses, state immunity, state doctrine, service
of process, gathering evidence abroad, choice of law, and recognition and enforcement of foreign judgments.

Distinctive Features
*Uses a comparative approach that better prepares future lawyers for international litigation that may be initiated in countries other than the U.S.
*Offers a hypothetical at the beginning of each chapter to introduce the fundamental issue; the hypotheticals raise questions that are diagnostic rather than prescriptive, leading to many "right" answers
*Accommodates different types of coursesprofessors who employ a less theoretical approach can use the hypotheticals to ground class discussions
*Considers issues unique to arbitration as they arise in connection with the various topics studied
Visa hela texten

Stephen C. McCaffrey is one of the world's foremost experts on international water resources law and is one of the few Americans to have served as chair of the United Nations International Law Commission. He has published several books and dozens of law review articles in the field of international law, argued in front of The World Court, taught law courses in American and foreign universities, advised the State Department, and represented foreign governments and entities in various transnational disputes. Thomas O. Main is an emerging scholar in the field of procedural jurisprudence. He is author of Global Issues in Civil Procedure (Casebook Series) (2005) and is coauthor of Civil Procedure: Doctrine, Practice, and Context (2008) and Federal Rules of Civil Procedure (2007). He has taught numerous law courses in the United States and elsewhere.